For other uses, see Draka (disambiguation).

Draka was a courageous warrior of the Frostwolf clan, the mate of Durotan, and the mother of Go'el. After her death, she was sent to Maldraxxus where she became a member of the House of Eyes. After the house's destruction, she joined and rose to the rank of Baroness of the House of the Chosen.

When Draka was born, she was a weak and sickly orc. Not only her clan-mates discriminated against her, also other clans said she was a dishonor to the orcish race. Blackhand said that if she was born in his clan, she would have been drowned at a young age. Draka and her family were forced to move to the outskirts of the Frostwolf village by Garad.

As a teenager, Draka asked Mother Kashur if there was any way to strengthen her sickly body. Visited by a vision of the ancestors, Mother Kashur told Draka that there was a way, but it could mean death. Kashur sent Draka on a hunt to obtain a wing feather of windroc, horn of talbuk, and fur of clefthoof. From the three ingredients, Kashur claimed that she could make a potion to cure Draka's illness.

Young Draka started her adventure alone. She had never been allowed to join any orcish hunts, and now she had to learn from the world itself. As time passed, Draka's skill increased and, although still weak, she defeated and claimed her first kill of windroc.[5]

Draka was successful in defeating a talbuk and a clefthoof and obtained all the ingredients she needed. She returned back to Kashur, who revealed the true meaning of Draka's hunt, that the ingredients and potion were not truly needed. The hunt itself had been intended to make Draka a strong and determined Frostwolf orc. In the end, now proud and beautiful, Draka joined a celebration, where she was noticed by Durotan and Orgrim.[6] 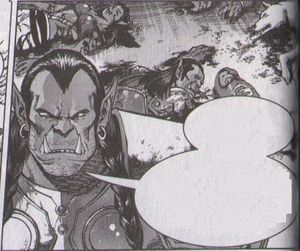 Durotan met Draka at the celebration. He was surprised to see her and was not sure whether she was of the Frostwolves. But then he remembered that she and her parents were exiled from the Frostwolf village because she was very sick. But now it seemed that she had overcome her illness.

The next day, Durotan asked her to join him on a hunt, something which often meant that a male orc intended to choose a female mate. Draka responded that she was too young to be anyone's mate. Durotan then insisted that it would be simply a hunt and nothing more.

They set out on their first hunt, where Durotan was injured by a wolf. However, together the two orcs were able to kill the beast. Draka said that she reached her adulthood today. They kissed, marking the beginning of their relationship.

After this, Draka stood by Durotan and his decisions through the years, although she did not like the situation of the orcs. She stood by Durotan when orcs accepted the demonic curse and when the Dark Portal was created. Draka, Durotan, and their clan were exiled and found their homes in Alterac Valley.[7]

Before leaving Draenor, Draka and Durotan visited Durotan's mother Geyah. Draka told her she was pregnant and Durotan added that the child would be named Go'el.[8]

In the year 1, Draka gave birth to Go'el, child of Durotan, shortly before joining her chieftain on his secret meeting in Loch Modan with their old comrade Orgrim Doomhammer.[9] There Durotan explained what he knew - about Gul'dan, the Shadow Council, the demonic bargain and Orgrim decided it was time to stop the evil warlock.[10] He urged Durotan and Draka to take shelter in the north until he sent word to them. Orgrim commanded his guards to accompany the Frostwolves on their journey home and keep them safe. That would be a mistake that Orgrim would regret to his dying day. His guards were not loyal to him, but to the Shadow Council.

The guards had heard every word between Orgrim and his visitors. They decided they didn't need Gul'dan's permission to eliminate the Frostwolves - clearly, he would want Durotan, Draka, and their child dead. After traveling north for several days, the guards fell upon Durotan and Draka. The Frostwolves fought bitterly against their attackers, killing one of them. But the remaining guards struck down Durotan and Draka, and Go'el was left to die in the frigid cold.[11][12]

Following her death, Draka's spirit came to reside within Maldraxxus of the Shadowlands which is ruled by the Necrolords' Covenant.[13]

The Horde warship Draka's Fury was named in her honor by Thrall, as a tribute to the strong orcish women in his life.[14]

When Thrall fled into a passage in the Caverns of Time to escape an armored assassin, he found himself in the time and place of his parents' murder of an alternate history.[15] Thrall pretended to be one of the bodyguards assigned to protect Durotan and Draka by Doomhammer as they returned home. Draka noticed that he had blue eyes and that he seemed very interested in the infant Thrall she was carrying. When the other bodyguard, Grukar summoned the assassins that attacked Draka and Durotan, Thrall could only watch, as saving them would alter the timeline.[16]

Another Draka appears in the alternate Draenor in the past during the war in Draenor.

Draka from a separate timeline[17] appears in the Warcraft film universe.

As Durotan is buried at the Rock of Durotan, she too may be buried there or at least near the Rock.