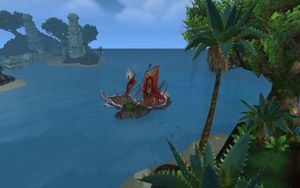 Draka's Fury was a Horde destroyer that was commissioned to protect and transport the former warchief Thrall. It was provided by the goblins of Ratchet and named by Thrall, as a tribute to the strong orc females in his life - namely his mother, Draka, and Aggra, his mate.[1]

En route to the Maelstrom with Thrall aboard, Draka's Fury was destroyed by an Alliance fleet off the Lost Isles. According to the

[Field Journal] of one of the Draka's Fury's crew, the captain is implied to have willingly led the ship to the Alliance ambush. A goblin vessel belonging to Trade Prince Gallywix, who had intended to sail from Kezan to Azshara with his cargo of slaves, was caught in the crossfire and wrecked on the island, and many of those slaves (including goblin players) joined with the survivors of the crew of Draka's Fury to fight their way off the Isles.