For the character from the main universe, see Draka.

Draka is the mate of Durotan. Similar to her husband, she values family and will defend the Frostwolf Orcs with her life. 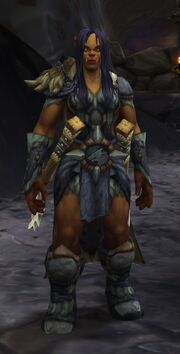 Draka in World of Warcraft.

Draka is first seen in Frostwall standing next to Thrall. As the Iron Horde-allied Thunderlord clan encroached upon Frostwolf territory, Draka, Durotan, and Ga'nar met with agents of Vol'jin's Horde. With far seer Drek'Thar vouching for the newcomers, both sides agreed to provide mutual aid in their efforts against the Iron Horde. When Durotan led his warriors into the Bladespire Citadel to claim it, she remained in Wor'gol. While the clan fought against the ogres, the Thunderlord clan attacked the home of the Frostwolves only to be met with the resistance of Draka and the adventurers. Later on, she asked Thrall about his mate and learned that she remained home with their newborn kids what surprised her as she maintains that a family needs to be together in times of war. She also watched the dispute between his mate and his brother. Eventually, Draka, alongside Lokra, Karg Bloodfury and Thrall went to Grom'gar, home of the Thunderlords and attacked it. Draka joined her clan and their allies in

[92] The Battle of Thunder Pass where she killed Malgrim Stormhand and suggested Drek'Thar to collapse the cliff and then watched Ga'nar's sacrifice.

After mourning the loss of Ga'nar, Draka joined Durotan and the Horde commander in their journey to Gorgrond to recruit aid against the Iron Horde. Their aid came in the unexpectedly compliant Laughing Skull clan and their shaman Kaz the Shrieker. During the Lumber Mill campaign, Draka and Kaz journeyed with the commander through the wilds, finding the captured orcs. At first, she maintained that Kaz was just using them but agreed to work and watch her eventually changing her attitude. They eventually defeated the great genesaur Iyu during

[92] Iyu while Durotan stayed behind and guarded the outpost. After recovering Primals and Breakers's artifacts, she lent her strength to the adventurer in Strike While the Iron is Hot, killing Goc and Commander Gar.

Following the Gorgrond campaign, Draka and Durotan are later found at Vol'jin's Pride in Talador where her orders led to diminishing the numbers of enemy orcs and machinery. During

[95] The Battle for Shattrath, she aids in the initial charge, but retreats to tend to the wounded while Durotan, Yrel, Maraad, Khadgar and the commander pursue Blackhand. As a token for help, she sent Beska Redtusk to Warspear in order to supply the Horde.

Draka is later seen during the Nagrand storyline at the commander's outpost from where she sent her scouts to spy on the ogres of Mar'gok's Overwatch. She later helps during

[100] And Justice for Thrall in the siege of Grommashar. Draka and her mate witness the death of Garrosh Hellscream, and she acknowledges that the unity of the orcs can be great but the Frostwolves should be the voice to guide them.

Back in Frostfire, Draka urged on Drek'Thar to reconnect with the elements. The two entered Farseer's Rock where she defended him from the attacking gorens while he was meditating. With the help of the adventurers, the Frostwolves journeyed to Magnarok where the elements have been imprisoned. She eventually assisted in the battle against the magnaron Kron who held the fury Exurotus under his sway. When the magnaron fell, she witnessed as Drek'Thar and Exurotus merged in one.

Draka arrived to the Iron Docks and defended the goblin camp. After the mission was completed, she returned to the new Frostwall Shipyard and was determined to protect the commander throughout Tanaan at all costs. The two arrived in Zeth'Kur and began scouting the orcs in the Dark Portal area. After the got their intel, they were warned by two shadow hunter trolls about the orcish machinery. After the cannons were dealt with, they found a perfect location for Vol'mar. Once it was built, she sent the adventurer to Durotan in the west. She remained and watched over the situation and events in Tanaan.

She is ultimately seen with her mate in the Throne of the Elements as the commander received an elemental blessing.

For years after Archimonde's death, the draenei and orcs lived in peace until naaru arrived on Draenor and the draenei became fanatical. Forming the Lightbound, they began to spread the Light whether others wanted them to or not; while some orcs joined willingly, others had it forced upon them. Durotan and Draka had a child named Geya'rah, and Durotan was killed by the Lightbound. Decades after the battle against Archimonde, Draka commanded a garrison in Nagrand against the Lightbound.[6] Draka and other orcs were left behind when the Mag'har group led by Geya'rah escaped to Azeroth.[7]

Mother Kashur once told us the story of the great colossus: Gorgrond.

It was the largest beast to ever walk the world, and when it fell, its body became the land, its spine the mountains, its blood the ore, and its will the savagery that rules this place.

It may have only been a fireside tale, but I can see how this story was inspired.

Look at this place. The botani are monsters.

I think I am starting to see why the Laughing Skull are as brutal as they are.

<Wolf-brother/Wolf-sister>, it is always good to see you.

It has been many years since last I strode the great Land of Winds. Yet some things, never change.

The Warsong are as dishonorable as ever, and now worse with this Garrosh Hellscream as their new warlord.

I understand you have had trouble with him before. We shall have to see about dealing with him.

Bringing Garrosh to justice is just about the only thing that Thrall talks about.