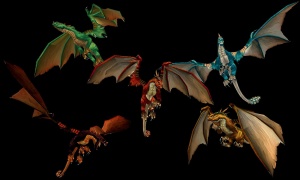 Drakes of the major flights. 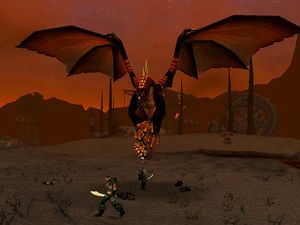 A black drake in Burning Steppes.

Drakes are dragons that are still relatively young in comparison to their ancient brethren. Drakes are almost always flying while moving, while nether drakes tend to walk. Fully grown dragons are bigger and typically walk while moving. Drakes can be found throughout Azeroth, but are especially prevalent in some areas, such as the Burning Steppes, the Swamp of Sorrows, Winterspring, and in many dungeons.

Many other drakes can be found in the Dragonblight, at the Wyrmrest Temple or in the dragonshrines. Some new drakes were also added in Cataclysm.

Drakes come in a variety of colors and are all found in different locations.