This article is about the united ice troll nation. For the largest tribe within it, for which it is named, see Drakkari tribe.

The Drakkari Empire,[2][3] or the Empire of Zul'Drak,[4] was among the largest troll nations ever to have existed, composed of the ice trolls of Old Kalimdor and led by the Drakkari tribe. The empire was formed at a time when troll dominance on Azeroth was unhindered. From the capital temple city of Gundrak in Zul'Drak, the Drakkari and their client tribes (including the Winterax and Frostmane) laid claim to much of the frigid north of the continent, bordering the Amani Empire to the southeast.

The Drakkari were known to be particularly cunning fighters, which they would prove to great effect during the Aqir and Troll War,[5] and were strong enough to challenge the Zandalari, Amani, and Gurubashi trolls.[6] As with the rest of their kind, the Drakkari Empire was fiercely devoted to loa worship, erecting temple cities and other structures in their honor.[7]

For millennia, the Drakkari Empire continued to thrive without incident. The Great Sundering, which shattered the old continent of Kalimdor, would prove disastrous for the Drakkari. Their empire was weakened, with the tribes dispersed to different continents. The Drakkari themselves, now living on Northrend, would continue to maintain the empire, though it was a shadow of their former glory. In time, it too would eventually fall at the hands of the Undead Scourge, marking the end of an era.[2] 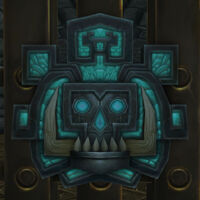 Crest of the Drakkari tribe

In ancient Azeroth, around 16,000 years prior to the First War, the troll tribes claimed vast portions of Ancient Kalimdor. The Drakkari tribe were one of several who rose to challenge the prominent Zandalari tribe, and occupied areas north of the Well of Eternity. Despite constant rivalries between the Drakkari and the Zandalari, Gurubashi, and Amani tribes, all-out war was rare. The Drakkari and their neighbors would instead focus mainly on expanding and settling unoccupied lands, of which there were plenty.[6]

Everything would change when Kith'ix the C'Thrax was awakened. Seeking to wipe out the trolls in the name of the Black Empire of millennia past, Kith'ix would rally the insectoid aqir, sparking the Aqir and Troll War. Directed by the Zandalari, the Drakkari and the other tribes united to form the Empire of Zul in order to combat this dire threat. Each tribe would coordinate their own attacks to drive back the aqiri swarms.

The Drakkari would be the first to act, pushing into the frozen north and battling a large colony of aqir. These aqir would harness corrupted tol'vir known as Obsidian Destroyers from Ulduar against the ice trolls. Immune to most physical damage, the tol'vir initially caused many casualties among the Drakkari and almost crushed them. Soon, however, the Drakkari trolls would develop new cunning and brilliant ways to knock over the Obsidian Destroyers, shattering them in the process. This would subsequently allow them to achieve victory in their theater of the war.

As the other tribes gained similar success against the aqir, and after defeating Kith'ix, the Empire of Zul proclaimed victory in the war. Unchallenged in the entirety of the continent, the trolls thrived. The Drakkari and the other tribes would grow distant from one another without the danger of the aqir to unite them. Now, they would each form their own empires, among them the Drakkari Empire, and continue to prosper within their own borders. 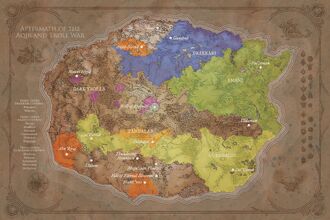 The troll empires at the end of the Aqir and Troll War, with the Drakkari Empire in blue.

The mighty Drakkari tribe would head the new Drakkari Empire from the temple city of Gundrak in the north. Though the smallest among the three newly-emerged troll powers (the others being the Amani Empire and the Gurubashi Empire) the Drakkari nonetheless thrived within their northern territories. Loa worship was deeply important to the Drakkari, and many such spirits occupied the empire's pantheon. Structures such as temple cities, shrines, altars, more were constructed to venerate their the loa as well as other gods.[8] In addition, the Drakkari used special prophets and high priests to commune with their deities, as well as oversee their worship.[9] The Frostmane and Winterax were two of the known member tribes of the Drakkari Empire at this time.

The empire of the Drakkari would survive relatively undisturbed for many thousands of years, even as troll mastery of Kalimdor was eventually ceded to the rising Kaldorei Empire of night elves. Though they did not take part in the War of the Ancients, they would ultimately suffer its consequences. The resulting Sundering violently shattered the continent, forming new and smaller landmasses. Much of Drakkari Empire was now lost, with tribes such as the Winterax and Frostmane completely separated from the Drakkari themselves.

Despite this, the Drakkari civilization would survive, becoming known as Zul'Drak on the new continent of Northrend. Drakkari influence was concentrated in the northeast of the continent, stretching from Gundrak in the east to Drak'Tharon Keep in the west.

Coming of the Scourge

The Drakkari Empire survived seemingly comfortably for over 10,000 years following the Sundering (longer than they had done before so). The ice trolls maintained large farms, supplied with a vast aqueduct system spanning the region of Zul'Drak. Worship of the loa also remained extremely prevalent. 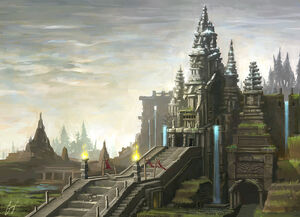 Drak'Tharon Keep would be the first to fall to the Undead Scourge.

Northrend would ultimately become home to the Scourge, the undead armies of the Lich King, based from Icecrown. When the Lich King awoke and began a major war against the living of Azeroth, Zul'Drak and the Drakkari found themselves in peril. The legions of undead assaulted the Drakkari kingdom relentlessly, eventually seizing the fortress of Drak'Tharon Keep as countless trolls were turned to undeath. The Lich King's forces continued their advance into Zul'Drak, threatening the entire Drakkar civilization.

Desperate to turn back the undead, the Drakkari turned on their own gods for strength. Maddened high prophets and their followers sacrificed the animal loa, spilling their blood and harnessing the untapped power. As more parts of the nation fell to the Scourge, the Argent Crusade and Knights of the Ebon Blade also arrived to fight both the restless undead and the frenzied trolls. Zol'Maz was Warlord of the Drakkari tribe at this time, though he too would eventually be killed by Zul'Drak's invaders.

In the depths of the capital of Gundrak, the most sacred shrines were said to be steeped in the mojo of slain gods. Surrounded by this dark energy, twisted Drakkari zealots grew in power, infusing their followers with incredible strength. If left undisturbed, the trolls of Gundrak would unleash their burgeoning might, plunging the entire region into chaos. Mortal champions would succeed in attacking the temple city, preventing this. Some of the histories of the Drakkari tribe and empire were recovered by a mission of Zandalari based from Zim'Torga, in the hope of preserving the ice trolls' past and heritage.[2]

The fall of Zul'Drak would spell doom for the Drakkari Empire,[2] though the ice trolls and Drakkari tribe itself would survive. Future attempts would nonetheless be made to redeem and revive the empire.

During the Cataclysm, the Zandalari would once more try to unite the troll tribes of Azeroth, and held a meeting of representatives from each. Ice trolls were present at the gathering, alongside Gurubashi, Amani, and Darkspear, though the Drakkari did not play a role in the following events, presumably too weak to do so.[10]

Some time later, the remaining Drakkari would bolster the Zandalari forces that would eventually invade the northern shores of Pandaria, along with the Gurubashi, Amani, and Farraki tribes. The tribe would be led in this endeavor by Frost King Malakk. To mark their suffering at the hands of the Scourge, they have added undead to their strength.[11] They took part to the fight during the fight of Horridon and the defense of the Council of Elders, but were ultimately defeated.

Some years later, Speaker Malaka'raz in the House of the Fallen Tribes in Zuldazar said that the empire was no more, and the Zandalari had left him as little more then a curiosity for others to gawk at. Zul and his rebels would learn from the Drakkari's example and attempt to drain the Zandalari loa in the same way the Drakkari had their loa.