This article is about the tribe itself. For the ice troll nation that it acted as the head of, see Drakkari Empire.

The Drakkari tribe was a tribe of ice trolls that founded the Drakkari Empire in Northrend, with the city of Gundrak as their old capital but it was eventually lost to the Scourge. They seemed to be a hardy people, persisting through hostilities from the empire of Azjol-Nerub and the Scourge. Speaker Malaka'raz in Zuldazar says the tribe eventually fell. 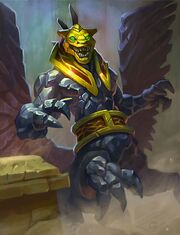 The Drakkari were one the troll tribes that arose to challenge the Zandalari for territory and power.[1]

When a group of trolls awakened Kith'ix, the C'Thrax viewed the troll nations with contempt and thus sought to destroy them with the aqir. At the onset of the Aqir and Troll War, numerous smaller tribes fell before the aqir. The Drakkari were one of the many troll tribes to join the Empire of Zul, in which the Zandalari took on the role of commanding the troll armies. The Empire of Zul forced the aqir to retreat and Kith'ix would be gravely wounded by the trolls and their loa allies.[1]

Seeking to permanently end the aqir threat, the Zandalari knew that no corner of the continent could be left unguarded, and so the Zandalari convinced the most power-hungry of the troll factions to establish new and permanent strongholds across Kalimdor. At the forefront of these groups were the Gurubashi, Amani, and Drakkari tribes. After they had fully vanquished the aqir in their new regions, they could lay uncontested claim to the untouched fertile lands that they now lived in. The ambitious tribes listened to the Zandalari and readily agreed.

The Drakkari tribe acted first, pushing into the frigid and snow-covered north against a colony of aqir that had retreated in that direction. While they had expected to find numerous aqir, they were shocked and caught off-guard by the presence of corrupted tol'vir guardians. A small group of these titan forged had been captured and enthralled from the nearby fortress of Ulduar. This particular type of tol'vir, known as Obsidian destroyers, caused havoc among the Drakkari ranks. Their size and stone skin allowed them to shrug off many conventional attacks, rendering them highly resistant to the trolls' normal form of warfare. The Drakkari were almost overpowered by these constructs, but they had evolved to become tenacious and brilliant in their thinking through years of combat. Eventually, the cunning fighters developed clever ways to knock over and shatter their foes, without suffering heavy casualties.[2]

Eventually, the Drakkari were exiled from the other troll nations for their extremely violent ways.[3] In time, the territory claimed by the Drakkari would become known as Zul'Drak and its capital became Gundrak, establishing the Drakkari Empire.

Drak'Tharon Keep once served the Drakkari trolls as a formidable outpost at the edge of their kingdom, Zul'Drak, but a recent Scourge invasion has delivered the fortress into the Lich King's hands. The keep's fallen defenders are now the Lich King's undead minions, and they are advancing into the heart of Drakkari territory.[4] 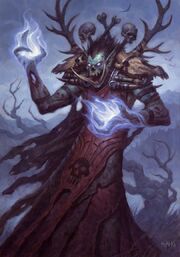 Desperate to save their kingdom from collapse, the trolls of Zul'Drak have turned on their ancient gods. The wild deities are now considered a source of untapped power, their potent blood providing the means to repel the Lich King's minions, who have overtaken parts of the troll nation. Heroes have recently journeyed to the beleaguered region to strike at the savage Drakkari and their maddened prophets. Even so, the greatest threat to the region is rumored to lie undisturbed within the capital of the ice trolls' empire, Gundrak. In the depths of the city, the most sacred shrines are said to be steeped in the mojo of slain gods. Surrounded by this dark energy, twisted Drakkari high prophets grow in power, infusing their followers with incredible strength. If left undisturbed, the trolls of Gundrak may soon unleash their burgeoning might, plunging the entire region into chaos.[5]

They also tried to summon water elementals to fight the Scourge, but in doing so inadvertently created water wavelings.[6]

The Zandalari of Zim'Torga are particularly interested in the madness that has overtaken the Drakkari tribe of Zul'Drak and seek to try and save some of the Drakkari history before it is wiped out for good.

During the meeting of the troll tribes held after the Cataclysm, Prophet Zul stated that Zul'Drak had fallen to the Scourge. A few ice trolls were seen in attendance.[7]

The remaining Drakkari were a part of the Zandalari Invaders, attacking the northern shores of Pandaria, along with the Gurubashi, Amani, and Farraki tribes. As mark of their fall against the Scourge, a part of their strength are undead.[8] They take part in the fight during the fight of Horridon and the defense of the Council of Elders. Their leader, Frost King Malakk is slain alongside the rest of the council members. This marks the last time the Drakkari are seen fighting as a unified tribe.

Speaker Malaka'raz can be found in Zuldazar on Zandalar. Malaka'raz is in the House of the Fallen Tribes and says that the Drakkari tribe is no more, leaving him as little more than a curiosity for others to gawk at.

Zul and his rebels would learn from the Drakkari's example and attempt to drain the Zandalari loa in the same way the Drakkari had their loa.

Unlike some other troll tribes, a group of ice trolls still retains a portion of its kingdom: the Drakkari live in Zul'Drak in Northrend. These are larger and stronger than ice trolls elsewhere, and indeed almost all other trolls, averaging 8 feet in height.[11]

This section contains information that needs to be cleaned up. Reason: Wotlk here as well.

The Drakkari tribe is one of a few small tribes that were driven out of civilized lands long ago for their extremely violent and cruel behavior. These barbarous trolls settled far in the north of ancient Kalimdor, adapted to their snowy environment, and formed the nation of Zul'Drak. After the Sundering, the Drakkari tribe continued to live in what had become the bitterly cold continent of Northrend. To this day, the ruins of the Drakkari civilization are scattered throughout the eastern side of Northrend.

Like Zandalari trolls, the Drakkari average eight feet in height: significantly larger than all other documented trolls. There the resemblance ends. Unlike the peaceful Zandalar tribe, Drakkari trolls are a ruthless and savage people who delight in battle and have no interest in the pursuit of knowledge. Hunting is also a popular pastime for Drakkari trolls because raw meat is the primary staple of their diet. Some Drakkari Trolls, however, such as Gan'jo, contest that the tribe once had a more civilized way of life, that they had become a lost people, fierce and savage. For how long this has been the case is anyone's guess.

Regardless of its combat skills, the Drakkari tribe respects the might of the Lich King and does its best to avoid the growing forces of the Scourge. Even so, the Lich King has raised a number of ice trolls into undeath and forced them to serve him. The Scourge has also recently taken possession of Drak'Tharon Keep, an ancient Drakkari citadel. A war between the Scourge and Drakkari may be inevitable, and the outcome would surely be disastrous for the trolls.[citation needed]

Drakkari are unpleasant. They epitomize the nastiness and barbarism of trolls everywhere. They’re large, bigger than any other troll (except trolls of the Zandalar tribe, the first tribe to exist and who are the same size) and crude, and they prefer violence to discussion or negotiation. They are a barbaric people who practice voodoo and worship strange spirit-gods and devour their enemies — and sometimes their friends — raw. The only thing a Drakkari respects is strength and the only thing they want from others is fear and flesh.[12]

Drakkari Hierophants, prior to being changed into Zandalari. Notably, Zandalari are already placed in the background as well, meaning this was likely not a placeholder.

While it is said the tribe is no more, it is entirely possible citizens of the tribe such as non-combatant and mercenaries survive, but are too small to properly rebuild.