Drakonid[2][3] (sometimes pluralized as drakonids[4][5][6] and also spelled draconid)[7] or drakonaar[8][9][10] are humanoid dragon-like creatures typically used as guards[3] and soldiers for their dragonflight.

A drakonid of the black dragonflight. 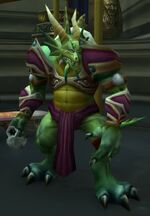 Drakonid are mortals empowered by the dragons they serve, via intentional alteration or via "unintended side effect of hanging out with dragons".[11] The process does not have to be willing.[12] Each drakonid seems to have a fatal weakness to one magic type, making it suffer enormous damage from that particular school. This weakness can be used to the advantage of any mortal army daring to step into the halls of Blackwing Lair in order to challenge the sinister Nefarian.

Bronze colored drakonid can be found patrolling the Caverns of Time. Nether drakonid can be found in Shadowmoon Valley, in the service of Illidan Stormrage. Drakonid of all five dragonflights guard the Wyrmrest Temple. The infinite dragonflight tempted many drakonid with promises of power, but most found only servitude and despair. One of the few exceptions is Chrono Lord Deja, who gained influence within the flight through his raw power and cunning.[13]

Drakonid have been described as half-man, half-dragon.[14] The ascendants and Zuluhed of the Dragonmaw on Outland can turn into drakonid.[15] Corla of the Twilight's Hammer in the Blackrock Caverns blessed fellow zealots by harnessing nether dragon essence to transform the believers into menacing twilight drakonid.[16]

Drakonid of all five main dragonflights 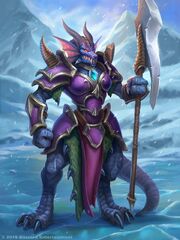 A female drakonid in Hearthstone.