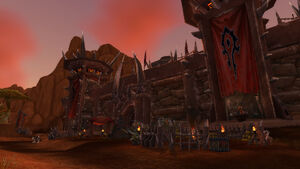 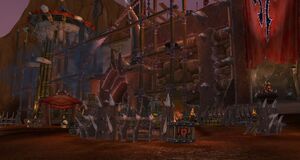 Under construction during Cataclysm

The Dranosh'ar Blockade is a massive system of fortifications outside the Gates of Orgrimmar, stretching east-west in front of the northern mountains of Durotar. It reaches from Skull Rock to the east to Rocktusk Farm to the west. It was built after the end of the war against the Lich King. It is presumably named in honor of Dranosh Saurfang, who fell at the Battle of Angrathar the Wrathgate during the war in Northrend.

At the front of it, several siege weapons stand ready for defense. Behind these, archers of the Horde train for battle, while laborers build machinery and transport goods. The blockade has built around Jaggedswine Farm and uses the hut there for storage. The hut just to the west of the front gate contains Gor the Enforcer and Shin Stonepillar, who have differing views on the leadership of the Horde.

During the Elemental Unrest, concerned citizens and the cultists of the Twilight's Hammer cult gathered near here.

During the Darkspear Rebellion, the area was filled with Garrosh Hellscream's Kor'kron loyalists and soldiers. The area was invaded by both, the Horde and Alliance revolutionaries, with the southern area becoming a staging camp for Vol'jin's forces. Since the fall of Garrosh's reign, the site is filled with Dranosh'ar Laborers once again.

The Dranosh'ar Blockade was the launching point for the Horde forces sent to attack the Broken Shore. Accepting

[98] The Legion Returns puts the player into a phased version of the blockade, where the weather is rather rainy and gloomy. Ships, soldiers and siege weapons are being prepared by all the races of the Horde. Several things can be seen there:

After the battle for the Broken Shore, the rumors about Vol'jin's demise had already spread, and the area was filled with concerned citizens of Orgrimmar, Undercity denizens, Kezan citizens, Sen'jin villagers, Thunder Bluff natives, and Silvermoon citizens discussing and crying together.

The area was once again populated by soldiers participating in the War of the Thorns.

Bwemba and Master Gadrin summoned the Spirit of Vol'jin here who proceeded to enter Orgrimmar in order to try to learn the truth about his final words.[1]

Over the course of Fourth War, the Horde split between Sylvanas Windrunner loyalists and Varok Saurfang's revolutionaries. Saurfang's revolutionaries would ally with the Alliance and the two armies marched to assault and face Sylvanas Windrunner. As the united armies prepared to assault Orgrimmar, they had to contend with Sylvanas's spies and protecting their siege weapons.[2][3] Knowing that Orgrimmar's greatest weakness was its multiple entrances, Saurfang's strategy relied on attacking all three entrances at once. To that end, he directed for Genn Greymane's forces to attack Orgrimmar from the Northern Barrens, Lor'themar Theron and Shandris Feathermoon to lead their forces to attack the city from Azshara, and he, Thrall, and Anduin would strike at Orgrimmar from the Dranosh'ar Blockade itself.[4]

However, before the battle could commence, Saurfang, recognizing Sylvanas's loyalists as his brothers and sisters in the Horde and unwilling to spill more Horde blood, challenged Sylvanas to Mak'gora, in spite of Thrall voicing his suspicions that he would die. When Sylvanas questioned why she should accept his challenge, Saurfang merely pointed out that she wanted him to suffer, causing Sylvanas to wordlessly agree. While Sylvanas armed herself, Saurfang was granted an axe by Thrall and Shalamayne by Anduin. Sylvanas initially had the upper hand against Saurfang, however, when she began to mock him about hope, Saurfang got his second wind by declaring that Sylvanas couldn't kill hope. As Saurfang turned the tide against Sylvanas, he claimed that she failed to kill hope at Teldrassil, failed in getting the Horde and Alliance to keep killing each other, he further declared that the Horde would endure, that the Horde was strong, and the high overlord was able to slash Sylvanas across her eye. This turn caused an enraged Sylvanas to declare that the Horde was nothing, that they were all nothing. Sylvanas then killed Saurfang quickly with a blast of unknown magic and abandoned the battlefield and the Horde altogether.[5]