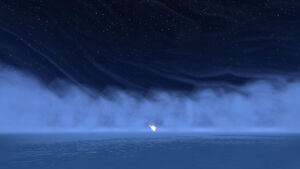 The Dread Expanse is the realm created by the Sha of Fear and a subzone of the Terrace of Endless Spring. It is described as a "watery wasteland" and is a near endless ocean cloaked by fog and the starry nighttime sky, with occasional thunder. The only inhabitants are the Sha of Fear and his Dread Spawn servants.

The area is only seen when fighting the Sha of Fear on heroic mode. When players defeat the Sha, a glowing light appears in the center of the area to transport players back to the terrace, players may also use the same light to come back to the wasteland.

There are a number of Old God related realms: Twilight Realm, Realm of Y'Shaarj, Za'qul's Fear realm and Delirium realm, and Ny'alotha, the locations inside of the minds of Yogg-Saron and N'Zoth and the Void realm all of which could have some relation to the Dread Expanse or one another in some way.