Dread Ship Vazuvius is a level 93 rare elite Forsaken battleship located north of the Misty Strand near the Timeless Isle. The encounter is started by someone using a

[Mist-Filled Spirit Lantern] at the glowing Cursed Gravestone in the strand, which drops from Evermaw, the rare elite whale shark circling the island. The gravestone has an hour-long cooldown, so even if multiple players loot the spirit lantern from Evermaw, it can only be summoned once every 60 minutes. Also of important note is that Dread Ship Vazuvius has an "enrage" timer; if it is not killed within a certain amount of time after combat starts, it sails away and soon despawns.

Players cannot get within the hitbox of the ship, as it will knock back roughly 100 yards back into the water. On either side of the ship (port or starboard), the ship-mounted cannons will launch instant Cannon Barrages at players within their line of sight who are foolish enough to stay still long enough to get hit. On deck, skeletal pirates will launch barrels of Burning Pitch at players' positions, spawning pools of fire that tick for 100,000 damage a second while swimming in it. In front of the ship, the large skull launches instant Dark Barrages at players in the front half of the ship.

The best strategy for avoiding all the abilities is to swim down to the bottom, then across until you are underneath the ship. (For melee characters: In addition to the previous instruction, swim somewhat upwards until the mob is just within hit range.) This method requires that players pay attention to their Breath or utilize an item or spell which grants underwater breathing.

Another method is to keep moving to avoid the burning pitch, and be try to behind the ship to limit incoming cannon barrages.

To check whether Dread Ship Vazuvius has been looted today, copy and paste this command into the chat window:

If a "true" appears in the chat window, Dread Ship Vazuvius has been looted today; "false" indicates the opposite. 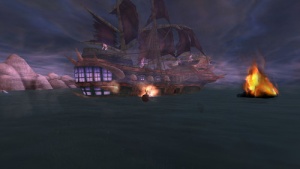 The ship in battle

"Enrage"
Dread Captain Genest yells: No one can stop us! Onward to the open seas!

Aggro
Dread Captain Genest yells: Kill them all! No survivors!

Death
Dread Captain Genest yells: This cannot be! The Vazuvius could never fall to the likes of you!