For the mount, see

[Reins of the Dread Raven].

Dread ravens are a species of giant birds native to the world of Draenor. They are the children of the "Raven God", Anzu, and have close ties to the arakkoa. 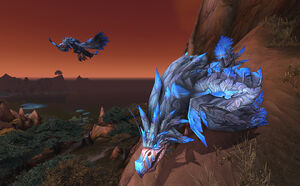 Two dread ravens in the Spires of Arak.

The dread ravens are the children of the Raven God Anzu, as the kaliri are to Rukhmar and the wind serpents were to Sethe.[1] Long ago, after a battle with Sethe, Anzu was cursed never to fly again. He disappeared into the shadows, later to become the patron God of many flightless arakkoa outcasts. His children, the dangerous and shadowy dread ravens, still populate the Spires of Arak to this day. Fiercely strong and surprisingly intelligent, dread ravens are dangerous when their territory is breached, particularly if their hatchlings are jeopardized. They are a grave threat on land and even more terrifying when they strike from above. Adventurers should be wary of their powerful headbutt or deafening screech. Stronger dread ravens use their wings as weapons, buffeting explorers with winds that threaten to blow them off the spires' high cliffs.[2] Ka'alu is the current leader of the dread ravens; Anzu left her to watch over them when he retreated into a world of darkness.[3]

The dread ravens seem to have mostly gone extinct when Draenor became Outland, likely because they were native to the Spires of Arak which were destroyed. Yikkan Izu, who was transported to Azeroth to serve as a Brawler's Guild gladiator, is one of the few remaining specimens.

Bathed in the blood of demons, corrupted dread ravens are significantly more aggressive, and will often kill one another if kept in confinement.[4] 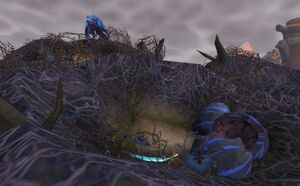 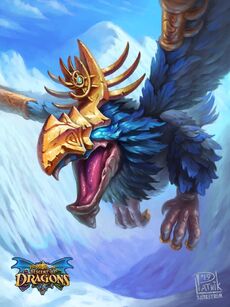 A dread raven in Hearthstone.

[Dread Hatchling] is granted upon purchase of the Warlords of Draenor Collector's Edition.

Dread ravens are tamable by hunters as part of the bird of prey family. The flightless, corrupted model is unique to only one tamable NPC: Blaithe, as Anzu cannot be tamed. 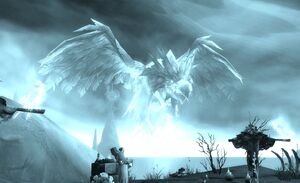 A dread raven Spirit Healer in Spires of Arak.

These ravens may be dread ravens, or may simply be reusing the model:

In addition, the Dire Ravens in Blade's Edge Mountains are probably meant to be dread ravens given their association with the Grishna who follow Anzu, but the model did not yet exist at the time they were implemented.