From Wowpedia
(Redirected from Dreadlord's Fall)
Jump to: navigation, search

Dreadlord's Fall is chapter 5 of the Legacy of the Damned campaign.

It was the third battle of the Civil War in the Plaguelands, and the second of the uprising of Sylvanas Windrunner, who sought to take control of the Plaguelands away from the dreadlords Balnazzar, Detheroc and Varimathras in order to establish a power base of her own which would allow her to oppose and eventually destroy the Scourge and the Lich King.

At that same moment, back in the Plaguelands, Sylvanas and her loyal minions plan their next surgical strike against the dreadlords' power.

Sylvanas had already defeated Varimathras and his minions, and forcibly recruited the dreadlord as her lieutenant, with the aid of the forces of Blackthorn, Mug'thol, Snarlmane, and the Murloc Puddle Lord. However, Detheroc and Balnazzar remained a threat for her plans. With the information provided to her by Varimathras, Sylvanas took her forces to the Western Plaguelands, were Detheroc had set camp, protected not only the Undead under his control, but also by Garithos and his resistance, all of which had fallen under Detheroc's mind control.

Sylvanas possessed two footmen and made them ask to open the gates of Detheroc's base, a necromancer opened them and seconds later Sylvanas, her forces and the footmen killed the necromancer and his soldiers. With her enemy sleeping Sylvanas is able to move her forces deeper into the city and one of their encampments. However with alone a limited amount of time before the enemy awakes, Sylvanas would either continue the strike to try an eliminate one of her enemies completely or establish a new encampment within the city itself. Either way once the time runs out and the remaining enemy forces awaken, they immediately run off to destroy Sylvanas's base outside of the city.

At this point the base can be abandoned as a new stronghold is established (or further reinforced) over the remains of the destroyed encampment within the city or a defensive measure is taken to save the encampment outside of the city walls. Regardless Sylvanas is able to secure her forces and launch continued attacks against Detheroc's forces. Over time the fight against Detheroc ends with Detheroc seemingly slain, Garithos freed from mind control, and Garithos and Sylvanas entering into an "alliance" to free Lordaeron from Balnazzar.

Detheroc and Garithos' forces slumber, giving you the opportunity to strike their bases without fear of reinforcements. Act quickly and decimate as much of the enemy as possible before the entire stronghold is alerted to your presence.

Detheroc cowers within the walls of the city, believing his pet Human, Garithos, will keep him safe. Show him the foolishness of trusting others to guard him by crushing them both.

Sylvanas Windrunner: You've done well, Varimathras. You've led us straight to Detheroc's stronghold. But tell me, who are those humans?

Varimathras: Detheroc used his telepathy to enslave a top-ranking human warlord. I believe his name was Garabon or Gilithos or something. Human names all sound the same to me.

Varimathras: Instead of stamping it out, Detheroc has taken control of the last pocket of human resistance. They maintain their own army within the keep.

Sylvanas Windrunner: Your brother is more clever than I thought. His defenses are considerable.

Varimathras: Yes. And with this paltry force you've mustered, a direct assault on his walls would be suicide!

Sylvanas Windrunner: I have no intention of assaulting the walls.

Varimathras: Then let's go before he---

Sylvanas Windrunner: My banshees will possess those hapless humans. We'll use them to open the gates for us.

Varimathras: You realize we'll have only a short amount of time before he discovers what we're up to?

Sylvanas Windrunner: Of course. If we strike quickly enough, Detheroc will never know what hit him.

Banshee: Whom do you serve, human?

Footman: The Dark Lady. I am hers to command.

Necromancer: The patrol has returned! Open the gates!

Sylvanas Windrunner: Ready yourselves. The moment is upon us!

Sylvanas Windrunner: We can attack either of the two bases with impunity, but it's only a matter of time before the other is alerted to our presence.

Varimathras: We're out of time! Both bases have been alerted to our presence. We've got to bolster our defenses before they launch their counterattack!

Sylvanas Windrunner: Detheroc will send his forces soon. We must be ready!

Detheroc: Traitor! How could you betray us like this? We could have ruled this land together!

Varimathras: Sylvanas has greater strength than you know, brother. I'll take my chances with her.

Sylvanas Windrunner: You must be the human in command of this rabble.

Grand Marshal Garithos: I am Garithos. I have sworn to defend the master with my life!

Sylvanas Windrunner: The humans' destruction gives me a certain amount of satisfaction. But Detheroc is the true threat here. It's not over till he lies dead at my feet.

Grand Marshal Garithos: The spell has been lifted. Is the nightmare finally over?

Sylvanas Windrunner: Stand down, humans. I have no quarrel with you.

Grand Marshal Garithos: What is it you want, elf witch?

Sylvanas Windrunner: We have a common enemy. The last dreadlord, Balnazzar, currently controls the capital city of your kingdom. If you help me kill him, I'll see to it that you get your lands back.

Grand Marshal Garithos: Why should we trust you? You're part of the Scourge that drove us out in the first place!

Sylvanas Windrunner: Not anymore. My only interest here is vengeance.

Grand Marshal Garithos: Very well. I'll rally what's left of my forces and meet you outside the gates.
Garithos leaves.

Varimathras: Come now, you have no intention of giving them their lands back.

Sylvanas Windrunner: Of course not. The humans are simply a means to an end.

Varimathras: You sound more like one of us with every passing day, my lady. 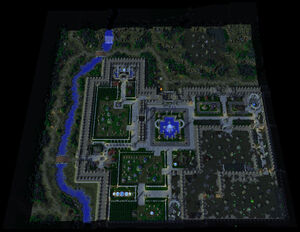