From Wowpedia
(Redirected from Dreadmaul Hold)
Jump to: navigation, search 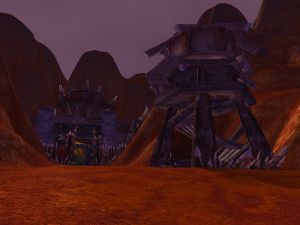 The hold before Cataclysm.

Okril'lon Hold, previously called Dreadmaul Hold, was a Horde fortress in the northwest corner of the Blasted Lands. It was originally called Rockard, but was later renamed by the Dreadmaul ogres who took control of it. It contains a barracks and a blacksmith.

During the Ironmarch invasion the hold was captured by the Iron Horde and served as their headquarters for the invasion. The Horde and the Alliance eventually killed its leader.

The fortress was founded as an outpost, called Rockard, in the Black Morass, after the first opening of the Dark Portal. It is one of the oldest orc cities of Azeroth,[1] along with the town of Stonard.

Rockard seemingly survived the Second War as it was still under orc control. But not for long, as it was taken over by the Dreadmaul ogres, who forced out the orcs and renamed it Dreadmaul Hold.[1] It became the main encampment of the Dreadmaul ogres under the rulership of Grol the Destroyer, who became a servant of the demon Razelikh the Defiler. Grol ambushed Loramus Thalipedes when he arrived in the Blasted Lands to hunt Razelikh, and both died during the fight.[2] Many other ogres were also killed by adventurers sent by the Fallen Hero of the Horde, to retrieve the Amulet of Grol.

The Horde forces, led by Warmatron Okrilla, managed to regain control of Dreadmaul Hold after the Cataclysm. Some of the ogre inhabitants were enslaved, but many others fled, and later begun to ambush the hold.[3] Now Okrilla, the new leader of the fortress, does not allow any non-orc into town,[4] and started to launch attacks against the Alliance forces of Nethergarde Keep.[5]

Dreadmaul Hold, now named Okril'lon Hold, was taken over by the Iron Horde during the Ironmarch invasion. The Azerothian forces launched a counterattack and killed its new leader, Gar'mak Bladetwist.

In the human campaign of Warcraft: Orcs & Humans, Rockard and Stonard are mentioned as the last defense of the Horde before Blackrock Spire and both were destroyed at the end of the campaign.[6] Since the last stages of the human campaign are not canon, both survived the war.