This article is about the armor set. For other uses, see Dreadnaught (disambiguation).

Most tier 3 items can be acquired through quests given by Korfax, who can be found in Light's Hope Chapel in the Eastern Plaguelands. Before the quests become active, Echoes of War must be completed.

The quests require several crafting materials, Wartorn Plate Scraps (which drop from trash mobs in Naxxramas) as well as a token from a boss in Naxxramas.

The only exception is the

[Ring of the Dreadnaught], which drops directly from Kel'Thuzad in Naxxramas.

The set has since been removed, but was later reintroduced and made available in the Black Market Auction House. 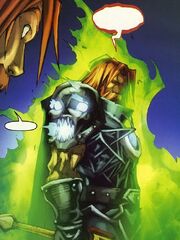 In World of Warcraft, it was originally said that the Dreadnaught's Battlegear was the armor of Highlord Alexandros Mograine, founder of the Scarlet Crusade. Korfax explained the lore:

"The first suit of Dreadnaught armor was made exclusively for the Scarlet Highlord Mograine. Whilst donning the full suit, the Highlord looked himself to be a demon from the depths of the Nether.

Aye, 'twas quite a sight to behold as Mograine would wade into a hundred Scourge, Ashbringer held high, and come out on the other side in a cloud of dust and flames - enemies left in ashes beneath his feet.

It was not until after his controversial death that the knights and warriors of Lordaeron would wear similarly fashioned suits in honor of their fallen hero. While the death of Mograine was a great victory for Kel'Thuzad, the resulting martyrdom would be felt until the end of the war.

Where one did fall, many would rise..."

The composition of Dreadnaught armor, according to the repeating quest Binding the Dreadnaught, is primarily Dark Iron, as Korfax requests endless quantities of

[Dark Iron Scraps] to construct the armor. How he manipulates Dark Iron without access to the Black Anvil or Black Forge remains a mystery.

In the Ashbringer comic the story is slightly different, as Mograine never was a member of the Scarlet Crusade and didn't wear the Dreadnaught's Battlegear in his life. However, his ghost was briefly seen wearing the plate armor set when he stroke down his treacherous son Renault in the Naxxramas issue.