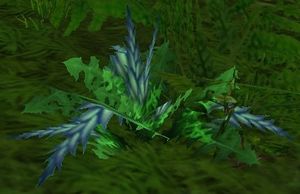 Dreamfoil is an herb that can be gathered with Herbalism (270). It can be found in most level 50-60 Azerothian zones, especially in the Blasted Lands, as well as some low level Outland zones. It can also occasionally drop off of "plant-like" (treants, bog beasts, etc.) enemies levels 50-60.

Dreamfoil is one of the only herbs found both in Azeroth and Outland. While originally from Azeroth, it was carried through the dark portal by the Horde and Alliance, whether by accident or on purpose, 20 years prior to the Burning Crusade. This explains the fact that the herb is only found in the first two zones, the areas with the highest concentration of Horde, Alliance, and Cenarion forces, who were most likely to carry this seed. This herb is more than likely one of the more heartier breeds of Azerothian plants, as it appears to be the one of only a few able to survive in Outland.