Drinks come in many forms in WoW

In World of Warcraft, drink can mean a couple of things:

Drink vendors will appear with as a bread/milk icon (

) at their locations, when using the minimap tracking feature.

Drink items can be received as quest rewards, purchased from vendors, created with cooking*, found in containers such as Water Barrels and Milk Barrels, and conjured by mages. Mana restoring drink items are often referred to collectively as "water", which is not strictly accurate.

Only a few types of drink can be created with cooking:

Alcoholic drinks (ale, beer, wine, mead, etc.) can be purchased from innkeepers, vendors and from events, received as quest rewards, or found as drops. A few can be made by cooking. These drinks do not restore mana, but instead cause your character to become tipsy. (Winter Veil Egg Nog restores health.) Some also provide temporary stat buffs. As of Patch 2.1, these buffs count as

[Well Fed] and do not stack with food buffs anymore.

1 This is the base price before any discounts. 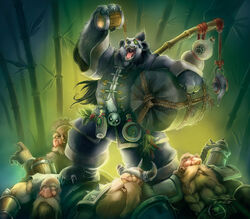 A panda and a group of dwarves enjoying brew.

1 This is the base price before any discounts.

[It's Happy Hour Somewhere] requires a character to "Drink 25 different types of beverages." Drinks that provide a restorative effect over time and alcoholic beverages appear to count for this achievement, potions, elixirs, and flasks do not. The common thread is items that are conceptually a beverage count.

A possible explanation for why drinking things restores mana is given by the March Issue of Kirin Tor Monthly. It states that "proper hydration is critical to effective spellcasting". This may have been a joke.