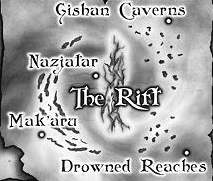 The Drowned Reaches to the southeast.

The Drowned Reaches is a great ship graveyard located on the southeastern edge of the Boiling Terrace. Since 10,000 years ago, ships that run afoul of the Maelstrom are caught in its whirlpool, sucked downward, and the currents rip them asunder and deposit their remains here.[1] Both the Horde and the Alliance lost numerous ships to the Drowned Reaches during the exodus to Kalimdor.[2]

Because the sailors die in fear and agony and are surrounded by the Maelstrom's unstable influence, the dead often do not find peace. The zombified and skeletal remains of these unfortunates wander the Boiling Terrace, raging at their fate. The naga fear the undead and avoid this area; so far, they have managed to avoid outright conflict with the millennia-strong drowned men and women.[1]