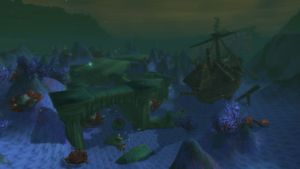 Ships sunken on the Drowned Reef

The Drowned Reef is a dangerous and mysterious reef on the southern shores of Arathi Highlands.

The dangers of the reef are many, and numerous ships have found their last harbor there, including Maiden's Folly and Spirit of Silverpine. Under the waters of the bay lies a ruined, sunken, ancient elven city, which is now inhabited by the naga of the Daggerspine tribe, who are led by Prince Nazjak.

The Daggerspine seem to be able to control the tides of the bay, dooming many hapless crews trying to find refuge in Faldir's Cove.