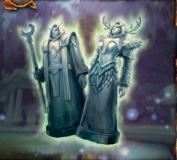 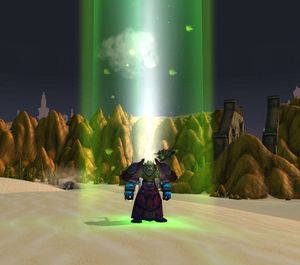 Druid and Priest Statue Set is a rare archaeology artifact that requires 150 skill to find and 100 Night Elf Archaeology Fragments to solve. Up to three

When activated, a green shaft of light centered on the character appears for 10 seconds. 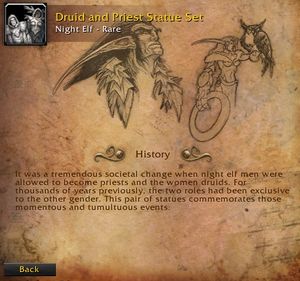 These are the remains of a pair of statues of precious metal. They do not seem carved or molded so much as grown, as if free from an artisan's touch. Both figures are night elves. The priest is apparently male and the druid female, which must carry some significance.

It was a tremendous societal change when night elf men were allowed to become priests and the women druids. For thousands of years previously, the two roles had been exclusive to the other gender. This pair of statues commemorates those momentous and tumultuous events.

The Statue Set's effect is modified by

[Shadowform]. This changes the beam from green to purple, and the leaves from green to gold. Activating or de-activating Shadowform while the Statue Set's effect is active will cause it to change color accordingly.

Although using the Statue Set will dismount players, it is possible to use it and then mount. Using it while flying on a mount may cause you to fall to your death, but will still trigger the effect on the way down.

The beam always descends from directly above the player's head. Pitching up or down (such as when swimming, flying or even climbing hills) will cause the beam to tilt accordingly. Flying players can use the pitch up/down controls to briefly cause the light beam to shine up from the ground, or become a catherine wheel of green light. Since the light shines up from the player's head, pitching up while flying will cause the beam to shine into the center of the circle, while pitching down will cause it to shine outwards.