Druid of the wild

Note: The "druid of the wild" (lower case) is a class rather than a confirmed organization.

Druid of the wild is a class of druid which incorporate many different animals and animalistic aspects into their repertoire. Some still call themselves druids of the wild to represent their breadth, but as this approach is now standard, mostly they are called just druids.[1] They are tied to the living aspects of nature — flora and fauna. They do not dabble in elemental forces; such powers are the purview of shamans. A druid of the wild grows such a strong affinity with nature that she may assume the form of animals and even super-natural beasts.

A druid of the wild from Warcraft: The Roleplaying Game. 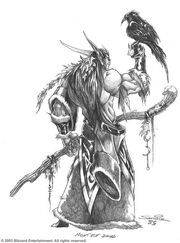 Another druid of the wild from Warcraft: The Roleplaying Game.

Druids of the wild are night elves and tauren.[2]

Traditionally, druids chose the path of a specific animal totem, becoming either druids of the claw or druids of the talon. Indeed, legends suggest that there were even more orders of druid than these two. After the Legion's invasion, the druids began to use the powers of all forms, combining their strengths against their enemies and becoming the druids of the wild.[3]

Ysera is the absolute ruler of the Emerald Dream. As such, most druids of the wild venerate her; and even if some do not treat her as a deity, she is at least acknowledged as one of the greatest paragons of nature in existence. Druids of the wild also visit the Emerald Dream using their hibernation ability and with certain spells. Generally, these travels happen unimpeded, since they are almost always peaceful and can cause no lasting damage.

Alexstrasza is rarely venerated by any particular group, although the druids of the wild appreciate her serene presence, considering her second in importance only to Ysera.

Therazane the Stonemother is ruler over the earth, dirt, rock, and mountains. She is revered by all earth elementals and creatures that dwell underneath the ground. Some druids of the wild see her as the embodiment of all that is peaceful and calm about the world.[4]