Druids of the Fang

For the mob, see Druid of the Fang (mob). 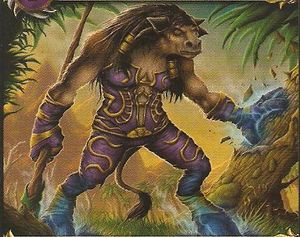 “The druids of the Cenarion Circle are helpless children. They cower in their precious Emerald Dream.”

— Mythen of the Fang

The Druid of the Fang were a group of druids found in the Wailing Caverns. Once part of an order of noble druids, the group, led by Naralex, sought to use the Caverns' underground springs to restore the Barrens to the lush and fertile land that it once was, using the power of the Emerald Dream.[2]

However, once connected to the Dream, the druid's vision somehow became a nightmare, and began to corrupt and transform the Caverns and its denizens.[2][3] Naralex and his druids were transformed into the Druids of the Fang, and began seeking to remake that land to match their own, twisted dreams.[4] They were eventually defeated by a group of adventurers.

“The Druids in the Wailing Caverns, the Druids of the Fang, are an aberration. They were part of an order of noble Druids whose plan was to heal the Barrens, but now seek to remake that land to match their own, twisted dreams.
The Druids of the Fang have four leaders, and each possesses a dream gem. Even now their faces haunt me! Defeat the leaders and bring me their gems, and the Barrens may again know peace.”

After the awakening of Naralex, the caverns that they have once inhabited have grown silent. Critters now roam the areas they once controlled. Only the pets of the fang lords and lady; Phyxia, Dreadcoil, Vilefang, and Hiss remain of the fang.[5]

The Druids of the Fang are an aberration. They seek to remake the land to mirror their own twisted dream.[6]

The Druids of the Fang, now infamous for a catastrophe in the Wailing Caverns, is the largest druidic group that retains a totem. The Druids of the Fang were previously a night elf faction devoted to healing the Barrens and returning it to its former lush glory. After their leader became trapped in an attempt to connect to the Emerald Dream, those close to him became corrupted and now keep others from attempting to save him. These druids work to spread the chaos and corruption in the caverns and throughout the Barrens. Turning independent to entreat the tauren druids for help, the remaining druids now struggle to free their leader, defeat their evil brethren, and complete the goal of restoring the Barrens from the further taint. Their biggest rivals are their own kind, the druids that carry corrupted souls and prevent the rescue of Naralex, the fallen Druid of the Fang leader. An organization beset by tragedy, these druids accept any and all help to achieve their goals. It is one of the few organizations supported by both the Alliance and Horde. They try to heal the Barrens. Some unequivocally tainted the Barrens. Others work to save their leader from the nightmare realm where he exists. Since the tragedy, the druids have scattered around Kalimdor to look for a key to saving their leader, but they gather mostly in Thunder Bluff and the Barrens.[7]

The leader of this shattered shell of a group was Naralex. The night elf druids paint him into a savior figure, one to deliver the Barrens from its desert existence and deliver us all from the demons. The tauren druids have a slightly more realistic view of this man: He thought the cavern complex underneath the Barrens would be the ideal place to try to siphon in some of the magic of the Emerald Dream. Bring in the dream magic, he thought, and the Barrens will flower again. This druid took a wrong turn and ended up not in the Emerald Dream, but stuck in some nightmare place. Now he is in a coma, and is the conduit through which this nightmare stuff is coming to warp and twist everything in the Wailing Caverns.

His seconds, four extremely powerful druids, were corrupted and still remain down there, guarding his body from anyone who tries to help. So no one reports to Naralex, although he is the leader. The remaining Druids of the Fang are so distraught that there is little organization among them. If a druid discovers a band of strong adventurers who seem decent enough, he entreats them for help. The tauren took pity on the disorganized druids and invited them into their fold. Now tauren druids, while they do not directly order the night elves, guide them in druidic spells to try to cleanse the caverns, and give them places to train to increase their skills. The night elf druids are focused on restoring their master to his former state and have since put off the small matter of fixing the Barrens. Yet it is likely that the Barrens can’t be fixed until Naralex is released from his sleep, so it probably all points to the same goal.

The Druids of the Fang have no central gathering place, unless one counts the horrors of the Wailing Caverns. Both kinds of druids can be found there — the mad, powerful, corrupted druids, and the confused and disorganized good ones. The latter are not as deep in the caverns. Tauren druids are keenly aware of the horrors of the Wailing Caverns, and druids of both races often travel between the Wailing Caverns, Crossroads, and Thunder Bluff, working to get more information and make plans. These druids often travel to Moonglade, as well, but they don’t spend too much time there.[7] 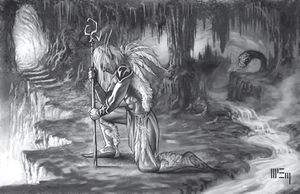 The Druids of the Fang were once a proud and powerful group. Druids who wished to connect to the potent power of the snake would study nature and live long lives of hardship and training. The existing Druids of the Fang would go through years of initiation and live in nature away from towns, communing with nature and those massive ancient trees. Now, their numbers have dwindled. Many druids lost their lives in the Third War; and after Naralex fell into his half-living, half-dead state, most figured the Druids of the Fang were a lost organization, dishonored by their destruction of the nature of the caves. Yet some night elves, and some tauren, believe the caverns can be cleansed. These optimistic youths either attempt to find druids in Thunder Bluff or Crossroads (or even the caverns, although some of those youths don’t survive that journey) who can help them.

Apart from a cursory check to see if the student has promise, a good heart, and a willingness to do hard work and possibly lose her soul in the corrupting magic of the caverns, the Druids of the Fang accept any new acolyte. Their numbers are low, and they are desperate to increase them. Even though the druids don’t seem to care too much who they take in, their new acolytes are eager and strong. There isn't a new initiate who isn’t determined to heal the caverns and the Barrens. Night elves and tauren in the organization do not quarrel, night elves in Thunder Bluff (who are always escorted by tauren, of course) and tauren in Moonglade (where druids sometimes go to meditate). The new ones are focused, and give some life to the old druids in their miserable states.[8]

Druids of the fang (class)

Druids of the fang have a natural affinity for snakes of all kinds, and are able to transform into various serpent shapes instead of the other animal forms other druids use, such as dire cobras and vipers. They utilize most of the abilities and powers of other druids, but have a few special perks: druids of the fang have access to very powerful sleep magic, able to draw entire groups into slumber, as well as utilize lightning and electricity-based spells.

Often, Druids of the Serpent totem can be found with animal companions that are snakes of some kind, from tiny grass snakes to large pythons.[citation needed]