The Drust were a population of seafaring vrykul who some time after the Sundering settled on the island of Kul Tiras.[1] They wielded powerful death magic and mainly lived in Drustvar, but also resided in several areas of Tiragarde Sound and to lesser extent Stormsong Valley; to this day, their ruins and ancient roads can be seen throughout the island. When human sailors from Gilneas arrived in Kul Tiras around 2,700 years ago, the Drust king Gorak Tul led his people into war against the human settlers. However, not all Drust agreed with the war, and the druidic Thornspeakers left Drust society to side with the humans.[2]

Gorak Tul eventually lost the conflict, and his Drust were almost all slain by the human invaders. However, the Drust remained as spirits in the dark realm of Thros and have since slowly been trying to make their way back to the mortal world. During the Fourth War, they made a pact with Lady Waycrest, helping her save her dying husband in exchange for assisting them. On the Drust's part, all they desired was vengeance against her people.[3] Following this pact, Waycrest began wielding Drust magic and formed the Heartsbane Coven, an order of witches who began terrorizing the people of Drustvar and worked to summon Gorak Tul back into the realm of the living.

Gorak Tul's efforts on Kul Tiras were eventually thwarted, but the Drust can also be found in large numbers in the Shadowlands, where they are attempting to invade the realm of Ardenweald from Thros.

After the Sundering, various vrykul tribes set out for the seas, and one such population of seafaring vrykul settled on Kul Tiras.[1]

Before the reign of Gorak Tul, the Drust practiced druidism. In the opinion of the druids, Gorak Tul's twisted ways brought disgrace to the Drust.[4] The Drust fought many enemies over their history, including beings that looked like themselves or great beasts, smaller beings that resembled gnomes in stature, and naga.[5]

Around 2,700 years ago, humans from Gilneas arrived on the island, which they would later call Kul Tiras.[6] The humans tried for peace with the Drust, but the latter went to war immediately,[7] aggressively launching raids against the humans' fledgling hamlets from Drustvar.[8] The Drust barbarians glorified the slaughter, attacking unarmed civilians.[7]

Only a few of the Drust tolerated new neighbors.[7] A member of the druidic Thornspeakers by the name of Sef Iwen protested the brutality of Gorak Tul, stating that the Drust could live in harmony with the humans if they tried. Tul gave Iwen the choice to either submit or "hide in the woods forever". Iwen chose the latter, believing Tul meant exile, but instead the king tore her soul from her body, cursing her to forever haunt the woods later called the Glenbrook Hunting Grounds and using her death as an example to scare other dissidents into submission.[9] This act of brutality alongside the others that Tul continued to enact upon the humans ultimately led to the Thornspeakers leaving the Drust to join Kul Tiran society. Some of the humans' Kul Tiran descendants heard the call of the wilds and sought to learn the ancient ways, and so the Drust Thornspeakers taught them the ways of druidism.[10]

The Drust assaults carried on for many years until the ancestors of House Waycrest decided something had to be done and began a war against the Drust. But though the Waycrests were hearty folk, the Drust's death magic was strong and the humans began to lose the war.[8] The Waycrests researched their magic and created the Order of Embers to fight them.[11] To counter the Drust magic, the Order of Embers used weapons of silver.[12] A complex alchemical solution called Liquid Fire was a weapon used to "burn away the Drust".[13]

In time the Drust would be forced to withdraw as they lost numbers to the human settlers. As the war went on, the desperate Drust called onto dark powers. Unbeknownst to them, they had reached the Emerald Nightmare.[1] Their fallen warriors would find refuge in Thros, an offshoot of the Nightmare which they named differently as they were not aware of what the Nightmare was.[1] When their great leader Gorak Tul ran out of living warriors, he conducted a ritual to create stone constructs to fight for him as part of his desperation to win. The Drust settlement of Gol Osigr would become the place of their final defeat. Colonel Arom Waycrest, who later became the first Lord of Drustvar, led the humans' final assault on the Drust and stabbed Gorak Tul himself. As he was stabbed Gorak Tul's power was broken and, with it, his connection to his stone constructs which shattered.[7] But though wounded and broken, Gorak Tul did not die.[14]

In modern times, the story has been warped. The modern Kul Tirans believe that the stone constructs were used for a longer period than just near the end of the war, that Arom had killed Gorak Tul, and that Gorak Tul's living army fell soon after his death instead of earlier on.[7]

The Drust would live on as spirits, trying to return to the physical world.[3] The Waycrests had wiped out the Drust, but could not destroy Gorak Tul. For countless years he waited to enact his vengeance from within Thros,[15] until Lady Waycrest provided the means.[16] 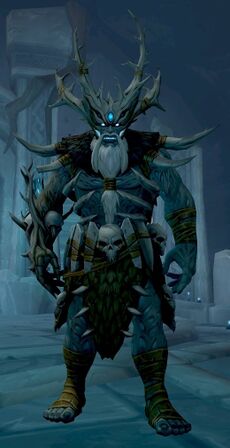 Stricken with grief due to her ailing husband Arthur, Lady Waycrest called out to any power that could save him. Gorak Tul answered her cry and promised that death would never part the couple, for a price.[17] Gorak Tul taught the Drust's ancient death magic[18] to Lady Waycrest, who in turn formed the Heartsbane Coven. The coven's magic awakened the remaining stone constructs[8] and stirred the Drust's spirits, drawing them back to fight once more as skeletons.[19] Other Drust spirits were put into wicker constructs.[20] During the events of the Kul Tiran civil war, the Heartsbane Coven of witches had started to go beyond constructing dark constructs, by conjuring the Drust physically through nightmarish rituals. They were stopped by the Order of Embers before they could be unleashed upon Drustvar.[21] Gorak Tul himself summoned many twisted Drust fiends during his confrontation with mortals at Waycrest Manor, and while the Order of Embers had stopped them from being unleashed upon Drustvar, several could still be found stalking the area.

But Lady Waycrest was merely a vessel for Gorak Tul's power, and her death opened the Rupture, the doorway for the Drust to enter Azeroth.[16] At the Rupture Gorak Tul was able to raise his people from the dead, but he was slain nonetheless. However, upon his death Gorak Tul revealed that it was only a vessel and he still existed in the Blighted Lands. Even so, the Heartsbane Coven was broken and Drustvar was released from Gorak Tul's power.

When Jaina Proudmoore was exiled to Fate's End by her own mother Katherine, Gorak Tul captured her and dragged her into Thros.[22] When the people of Kul Tiras sought to rescue Jaina and turned to the Drust druid Ulfar for help, Gorak Tul attacked him and the Thornspeakers to whom he had taught the Drust's ways. Gorak Tul was not happy that Ulfar had shared their gifts with the humans, but Ulfar himself saw Gorak Tul's twisted ways as bringing disgrace to the Drust.[23] Later, the Herald of Gorak Tul announced the return of the Drust's master to Katherine Proudmoore on her quest to find Jaina. Within Thros, Jaina was being tormented by memories of her past. After she was saved by her mother, Jaina and the adventurer slew Gorak Tul in his own domain.[24] 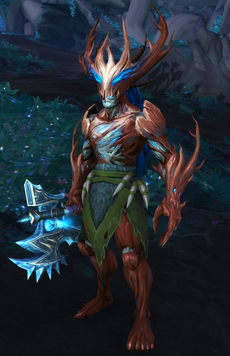 Please add any available information to this section.
With the drought weakening the guardians of Ardenweald, the ancient Drust have seized the opportunity to invade from their nightmarish realm of Thros. Using their twisted form of druidism to feed upon the dying groves, the Drust grow stronger with every wildseed that perishes. Though relatively few in number, the Drust are using dark rituals to pull the native fae into their forces.[25] Cursed to exist outside the cycle of life and death, the Drust now seek to circumvent their fate using Ardenweald's mechanisms of Rebirth.[26] 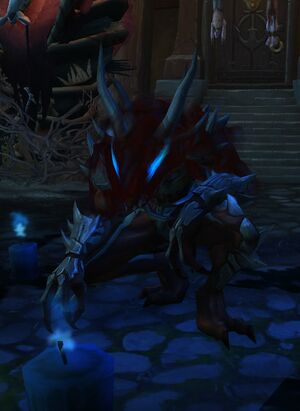 A Blighted Horror, an example of the most common form of the Drust.

The Drust come in several forms despite having been descended from vrykul. Concept art depicts the Drust as appearing extremely similar to Vrykul, albeit with pale skin and blue eyes. The Drust spirit, Sef Iwen, uses a vrykul female model, though she is the only Drust to be depicted in such a manner. The only other friendly Drust, Ulfar, does not ever leave his bear form; thus making his humanoid form's appearance unknown. The images of the Drust that appear at Gol Osigr are tall pale humans in a mix of primal looking armor; though this design is unique to their appearance here.

In the case of Gorak Tul and several other Drust spirits, they appear similar to their vrykul forebears, albeit with tree-like growths and skin grafts. This may predate their exposure to Thros, as their druidic forms show similar aesthetics, though in Gorak Tul's case this is notably enhanced. This includes warped eyes and a sinister mouth. This variant appears to be restricted to more powerful Drust, as from here their form begins to degrade.

The second variant of Drust is a Drust 'treeman' which is far more common. Introduced in World of Warcraft: Shadowlands, this form seems to be an in-between for the previous form and the next. For this form, the tree grafts have taken over the bulk of the Drust's body, their head nearly consumed by it, and their body mostly made of this material. Their hair has also been replaced with long flowing locks of Thros' energy. They are notably more scrawny, as opposed to the vrykul-esque build of their leaders.

The third variant, and most common, are the Drust horrors. These fiends crawl along the ground and hold little resemblance to their former selves, their skulls overtaken by the tree graft and morphed into a hideous creature, as well as their bodies being twisted out of their human-like appearance. Their feet and hands have been morphed into that of some sort of creature and the Thros energy has entirely taken over their heads. They clamor along the ground similarly to geists, able to climb sheer surfaces. They are still capable of speech and spell casting and are the only living invocation of a Drust seen on Azeroth outside of Gorak Tul or the Thornspeakers.

Several other variants exist, such as a female-only variant found in the Shadowlands that bears a striking resemblance to that of the Matrons. These women have no grafts or tree appendages, though their hair, feet, and fingers are stained with the energy of Thros. Undead Drust still wander the areas around their former lands in Drustvar, though they are all skeletal. Lastly, the Drust invoked by the Heartsbane Coven that did not arrive as horrors would have their spirits possess wooden golems made in the shape of their former bodies.