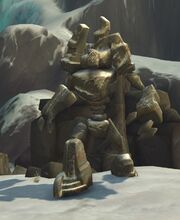 The Drust constructs[1][2] are stone beings created by Gorak Tul, empowered by the souls of his fallen soldiers when he ran low on troops in the ancient Drust war with the humans.[3] The souls were obtained by ritual sacrifice.[4] There are two varieties, one resembling revenants and one that is a taller humanoid shape. The drust constructs are made from the land, and their hearts are a runic power core. Unless the magic in the core is disrupted, more constructs will be created around the dark hearts.[5] Stone cairns empower the constructs.[1]

When the Drust were first learning to attach souls into constructs, they used the bones of their dead as hosts.[6] As the Drust became more skilled at trapping souls within objects, so did they become more adept at creating constructs of death in which to trap the souls. Revenants are amongst the fiercest of these creatures. Their bodies constructed from pieces that can no longer decompose, these creatures never tire and will hunt their prey for all eternity.[7]

In the modern day, the Heartsbane Coven's magic awakened the slumbering constructs.[8]

The most powerful one is the Hailstone Construct, a world boss.