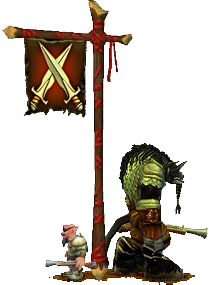 Dueling is a way for players in the PvE environment to fight each other consensually. Players from opposite factions can duel, but the mechanism is primarily for dueling players of the same faction. Perfect for challenging friends or testing your skills against your peers 1 on 1, duels offer no rewards, save the sweet taste of victory.

How do I start a duel?

Right-click on a player's portrait and select the "Duel" option. A Duel flag will drop from the sky, and if the other player accepts, a countdown will start showing the time remaining before the start of the duel. The circle around your opponent will turn red, indicating that the player is now hostile.

Another option is to type "/duel" while having the target you wish to duel both targeted and in range. This may be more convenient if you wish to create a macro for this function.

Dueling is disabled in most capital cities and in dungeons. Attempting to request a duel with another player in these locations will cause the on-screen notification "Dueling isn't allowed here." One exception is the Underbelly in Dalaran.

Some examples of usually frowned upon behavior:

These points are disputed among players. Discuss your opinions on the talk page. If you are having problems with any of these issues, make sure to discuss the points of your duel with your opponent before beginning.

Some examples of good behavior:

What ends a duel?

You can use /forfeit or /yield to end a duel if for example you agreed to one by accident, or some other circumstance dictates you need to leave (mob spawns and attacks a player)

It is generally discouraged to Duel in Contested territory on PvP servers. If you do decide to duel in contested territory, beware of enemy factions and their proximity to you. If you are both low on health and an enemy player shows up, it's two free Honor kills for them.

Players of opposing faction can duel, but be careful of the opponent switching on the PvP flag during the duel, as hitting him will make you PvP-flag-enabled. When this happens, you are attackable by anyone in his faction who may have been waiting for a chance to gank you.

What does winning a duel mean?

You win. You get glory (the system announces that you won). You don't earn XP, Honor or an opportunity to loot, you just get the satisfaction of knowing that you were able to defeat another player and possibly gain some experience at fighting other players that you will be able to use in the various forms of PvP combat. Sometimes players wager bets on duels, which means that you can earn (or lose) gold from dueling. However, the first time you win a duel, you receive the