For the in-game title, see Duelist (title). For the achievement, see

Duelists are a type of rogue combatants. They use rapiers.[1]

During the Burning Legion's third invasion, the Uncrowned deployed buccaneer duelists, trained from buccaneer pirates of the Bloodsail Buccaneers. 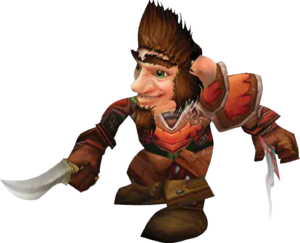 A puissant skill with a weapon, a keen intellect and a wicked wit all comprise the essentials of the duelist. Rare among the Horde, but often encountered swaggering along the promenades of human and goblin coastal cities, the duelist is a skilled sword fighter capable of amazing feats in battle. Relying on an almost supernatural skill with their weapons, the duelist is a welcome asset to any group.[2]