Duke Hydraxis is a water elemental located in The Heart of Azeroth, where he is a shaman champion. He is the leader of the Hydraxian Waterlords, and is a servant of Neptulon the Tidehunter.

Before the Cataclysm, Hydraxis was a level 60 quest giver located on an island northeast of the Ravencrest Monument in the contested territory of Azshara.

Duke Hydraxis revealed in his quests that the "pure" Elementals of Water are seeking to do battle against the other elements, and were willing to let mortals prove themselves to be worthy of fighting one of their grandest enemies, Ragnaros the Firelord and his servants in the Molten Core.

Hydraxis is sent by Neptulon to join the Earthen Ring at the Heart of Azeroth.[1]

He participated in the Battle for the Exodar battling against High General Rakeesh, along with Stormcaller Mylra and Stormbeak. 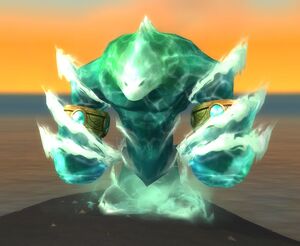 In Battle for Azeroth.

Hydraxis is back in Azshara, on the northern-eastern point of the Horde logo-shaped land in the Bay of Storms. He mentions that Azerite has thrown the elemental planes into chaos.[2]

Hydraxis later appeared alongside Neptulon and Champion Aquaclease to do battle with the forces of Queen Azshara in Nazjatar. 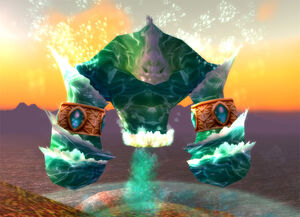 Duke Hydraxis before Legion in his original spot.

[120WQ] The Lords of Water
Greetings mortal. The naga have committed a grand crime against the power of my master, Neptulon.

The magic of the Tidestone is the magic of titans. Even now, that ancient power holds him at bay just as it holds back the sea. However, it cannot hold back his justice.

Will you join me in quelling these naga for their defiance of the great Neptulon?

Come, little Champion, and let us drown our enemies in the tides of justice!