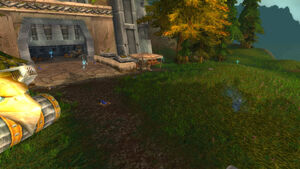 The ghosts of Dun Garok.

Dun Garok was a dwarven keep nestled into the southeastern hills of Hillsbrad Foothills. Led by Captain Ironhill, the dwarves helped protect the humans of Hillsbrad as well as the Azurelode Mine. The Forsaken loathed the presence of these dwarves and once offered several quests for Horde adventurers to infiltrate Dun Garok and kill the dwarves within.

The Forsaken, outnumbering the dwarves ten-to-one, assaulted them with all their might. The dwarves fought until the bitter end, but every last one of them died in defense of Dun Garok.[1]

The dwarves who fell in the battle became Dun Garok Spirits and now haunt the land, refusing to yield it even in death. The Forsaken eventually gave up on trying to inhabit the fortress and let the dead spirits keep their land.[2]

The ghost of Captain Ironhill has remained in Dun Garok, not for vengeance like the others, but out of sadness for his people that have remained. He tasks Horde adventurers to release their spirits from the place. Also, the ghost of Tamra Stormpike can occasionally be found in the main quarters, seething with hatred.

The Forsaken finally took over Dun Garok by controlling the ghosts. Meanwhile, troops from Ironforge marched to purge the Forsaken and the ghosts, and to retake the fortress. Both Jezelle Pruitt and Brandur Ironhammer‎ were encountered here by the opposing faction.[3]

An in-game memorial for Anthony Ray Stark (1961-2005), a friend of one of the developers, can be found south of here. 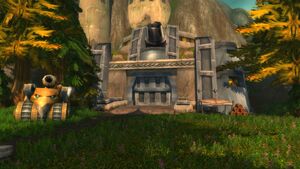 Although Dun Garok is present and can be visited in the Old Hillsbrad Foothills, the keep's door is shut tight and there is nothing of interest in the area.