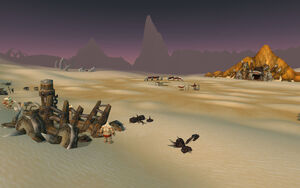 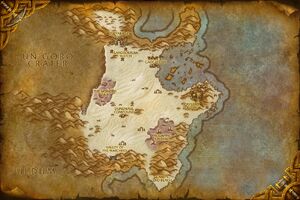 is the ogre mound of the Dunemaul ogres of Tanaris. Their leader, Sandscraper, resides here in his cave. Megs Dreadshredder, located just east at the Dunemaul Recruitment Camp, tries to "recruit" these ogres into the Horde.

During the Burning Legion's invasion, the camp falls under the Legion's control. Its residents are enslaved by nathrezim and are later killed by the defenders.

Mostly south of the compound and an area that is a part of the northern side of Southmoon Ruins is a fossil archaeology site.

Dunemaul Compound is a collection of huts set up around one of the few water holes in southern Tanaris. This place is home to the bronze-skinned Dunemaul ogres. Unlike most ogres, the Dunemauls keep to themselves, probably because traveling across the desert requires more water than they can spare. They don't like visitors, however.[1]