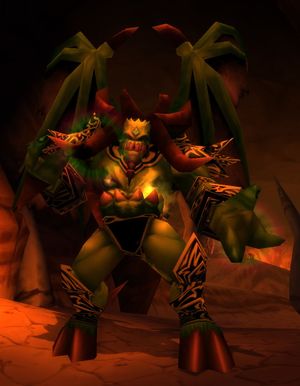 Durak is an orc warlock and quest giver in the back of the Splintertree Mine in Ashenvale.

Both Kadrak and Draaka request his services to defend Splintertree Post against the night elf assault, but Draaka later regrets her usage of fel magic and sends the adventurer to Orgrimmar to inform Eitrigg of her crime. In response, Eitrigg sends the adventurer back to Splintertree to tell Durak that the Horde will have nothing to do with his kind. When told of this, Durak says that "this is all happening sooner than I would like" and that the adventurer has outgrown their usefulness before revealing his true form: a demonic terrorguard.

What is it, puny mort-