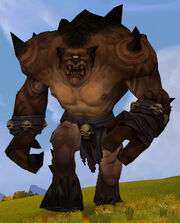 Durn the Hungerer as he appears in World of Warcraft.

The gronn Durn the Hungerer is one of the seven sons of Gruul the Dragonkiller, the gronn overlord of Outland's ogres.

Before patch 4.3.0, Durn was a difficult elite with 126,000 HP. For historical purposes, this section contains strategy that was appropriate before the nerf to Durn.

Durn wanders in a circular pattern around the Spirit Fields that surround Oshu'Gun in southwestern Nagrand. It is possible to wait at the area south of the Consortium camp and then tag him. Kiting is no longer possible since patch 2.1 He moves fast and is immune to any sort of crowd control, root, or snare.

For warlocks, bringing along an enslaved Felguard Legionnaire significantly helps with this encounter, as well as many of the other group quests in Nagrand. As of patch 3, a level 70+ demonology warlock can solo Durn with little effort, through the use of a Felguard and

It is also possible to solo him with a well-equipped protection warrior with moderate block values.[1]