From Wowpedia
(Redirected from Durnholde)
Jump to: navigation, search

Durnholde Keep is a ruined stronghold located east of the town of Tarren Mill in the Hillsbrad Foothills. It used to be an internment camp and prison for the orcs.[2]

Along with its inner barracks, Durnholde also had a mage tower and an arena. 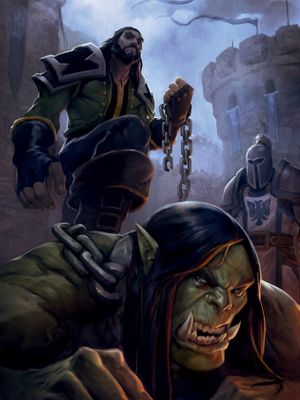 The forest troll warlord Zul'jin, being held in Durnholde Keep, was freed by Orgrim Doomhammer himself during the Battle of Hillsbrad Foothills.[3]

After the Second War, Durnholde served as the command center of the orc internment camps. The keep was initially ruled by the self-absorbed drunkard Lieutenant General Aedelas Blackmoore. 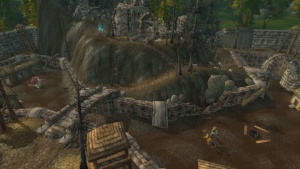 The Keep with a few of its new inhabitants post-Cataclysm.

After Go'el was found amongst the bloody bodies of his murdered parents by Aedelas Blackmoore, the orc baby was taken to Durnholde Keep. He was trained and taught by many, wet-nursed by a human woman, and grew to befriend her daughter, Taretha Foxton.

Blackmoore renamed the boy "Thrall", beat and tortured him in the ring, using Thrall to obtain greater rank and prestige. Taretha began to write him letters in his prison, and he wrote back to her. eventually writing that he would escape. Taretha created a diversion while Thrall escaped from his cell. They met up outside the fortress, and Taretha gave him provisions and supplies. He then left Durnholde, hoping never to return again.

However, Thrall rallied the free orcs in a campaign to end the internment camp system, eventually liberating the smaller encampments, and finally Thrall laid siege to Durnholde. Thrall slew Blackmoore in single combat, completely destroyed the keep, calling upon the Spirit of the Earth to level the fortress. It remains in ruins today and up until recently was used as an outpost of the Syndicate, which had staked a claim to many of the ruins in Hillsbrad, Arathi, and the Alterac Mountains.

Durnholde Keep has been mostly abandoned by the Syndicate and taken over by the Forsaken.[1] Under the command of Captain Jekyll at Eastpoint Tower, the Keep is a staging ground for level 23-25 Horde recruits. In it roams a handful of elite mobs: Zephyrus, Teracula, D-1000, Infernus, and Bloodvenom.

The only remaining Syndicate member is the 'free-wheeling tradeswoman' Kris Legace, who remains friendly to both factions.

Durnholde Keep is the focus of the questing in the Old Hillsbrad Foothills, accessed via the Caverns of Time. In the time-travel reality, Durnholde is bristling with guards and also is the site of five internment lodges where captive orcs are held. Players must enter Durnholde, set the lodges ablaze, and aid Thrall in his escape. See Escape from Durnholde Keep.

In Warcraft Adventures, Durnholde was the starting point as well as the last area of the game. An old man called Mathers was the chaplain of the keep, which also contained prison cells and a sizeable garrison. A bulletin board showed signs referring to the destruction of Alterac and the disappearance of Khadgar, Alleria Windrunner, Danath Trollbane, Turalyon and Kurdran Wildhammer, the leaders of the Alliance Expedition.

In the mountains near Durnholde lived Orgrim Doomhammer and a group of gnomish inventors. Gazlowe crashed his zeppelin there as well.

Lieutenant Blackmoore, a cruel and manipulative man, ruled this fortress. Warchief Thrall, the Horde's leader, spent his youth here as his slave. Now the famous Durnholde Keep is in the Syndicate's hands, and the organization uses it as a base to strike at Hillsbrad's farms and communities trying to expand its influence.[5]

In the RPG book Lands of Conflict, Durnholde Keep is labelled as part of the Alterac Mountains and Hillsbrad Foothills.[5]