For the character from the main universe, see Durotan.

“A family is like a pack of wolves. When all play their part, the pack succeeds. When they do not, the pack fails.”

Durotan was the chieftain of the Frostwolf Orcs and the ruler of Frostfire Ridge. He stood as a rare voice of reason in a world where war and brutality reign.[1] Durotan saw his clan, friends, and allies as he would a pack of wolves, each looking out for each other and pulling their own weight. As one of the few orc chieftains who refused to join the Iron Horde, he allied himself and his clan with Vol'jin's Horde. He was also one of the main protagonists of World of Warcraft: Warlords of Draenor.

For Durotan's early life, including his friendship with Orgrim Doomhammer, see Durotan.

Durotan was a son of Garad, the chieftain of the Frostwolf clan. He had two brothers. Of the three—Fenris, the oldest; Ga'nar, the firebrand; and Durotan, the youngest—Durotan was the one who embraced family and tradition most.[1]

As the Frostwolf clan was migrating, Durotan's mother Geyah was bitten by a drift lurker, which caused her to enter a coma. When his brother Ga'nar voiced to leave her to a natural death and get the clan out of the area, Durotan refused. As the rest of the clan moved on, Durotan and Stormfang remained with Geyah. At nightfall, the pair were attacked by a lone Garn and though the pair were able to kill the beast, Durotan knew that more of its pack would come at sundown and thus prepared for the onslaught. When they attacked, Durotan found himself gradually losing control of his anger and fell into a bloodlust, which caused him to kill everything that was moving. Soon after, Geyah awoke, and Durotan discovered that he killed Stormfang in his fury. Durotan decided to wear Stormfang's fur as a reminder for the old wolf's loyalty and courage, and to remind himself that even the noblest of Orcs may fall prey to the savagery within.[4]

When his ambitious brother Fenris vanished, Chieftain Garad chose Durotan as his new heir apparent, over the hotheaded Ga'nar. Yet the troubles for the Frostwolves didn't end there. The other clans banded together to forge an Iron Horde, an army bent on conquering Draenor. Garad refused to join the murderous campaign and isolated the Frostwolf clan in its home in Frostfire Ridge. The other orc warlords mobilized to bring the Frostwolves to heel. At this critical moment, Chieftain Garad and his son Ga'nar disappeared in the frozen wastes. As the now sole leader Durotan began to struggle to preserve what remains of the clan. Young, idealistic, and outnumbered, Durotan must decide the fate of the Frostwolves. If he fails, the last bastion of hope for orcs on Draenor will be lost.[1]

Loyal to his allies and terrifying to his enemies, Durotan has led the Frostwolf clan to a life in one of the most hostile lands imaginable. Durotan’s people rejected the Iron Horde’s call for orcish unity to focus on their own survival. They now subsist in the biting cold of Frostfire Ridge by cloaking themselves in furs and taming the massive frostwolves that accompany them, snarling and howling, in battle after battle.[5] 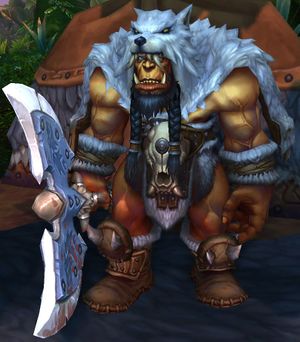 Durotan in World of Warcraft.

Durotan is first encountered after the Horde forces arrive on the shores of Frostfire Ridge. Though wary of the newcomers (due in part to Thrall's green skin), Durotan accepts Farseer Drek'Thar's vouching and welcomes them as friends to the harsh, icy home of the Frostwolf clan. Out of gratitude for saving his people in Tanaan, he assisted the Horde champions in building an outpost, and soon left for Bladespire Citadel to deal with the ogre empire's local bid for dominance. Durotan marshaled a Frostwolf raid to besiege the fortress, fighting his way to its heart and claiming it for the Frostwolves. He and Ga'nar clashed in the battle's aftermath, the elder brother seeking to push the advantage and drive out the Thunderlords, the neighboring clan who had gladly joined the Iron Horde's call and had begun attacking Frostwolf outposts across Frostfire. Durotan remained behind in Bladespire, hoping to conserve the clan's strength and strike when the timing was appropriate. He sent the Horde champion to fight with Draka, hoping to reunite with his mate soon, when the Thunderlords attacked Wor'gol but soon participated in the fight. Afterwards, he sent the adventurer to help Ga'nar in the north and Lokra in Stonefang Outpost.

Durotan eventually returned to the garrison, where he met with Draka and a victorious Ga'nar, the latter fresh from killing the Iron Wolf's three sons. Ga'nar challenged Durotan to a mak'gora for the leadership of the Frostwolves. Durotan refused, dropping his axe, and telling his brother to strike him down in cold blood if this is truly what he wanted for the Frostwolves. Ga'nar relented, unwilling to kill his brother, and reaffirms his loyalty to Durotan as chieftain. With the clan united, Durotan prepares to settle matters with the Thunderlord clan and staged a raid with Ga'nar on their warlord's stronghold. The brothers are stunned to learn that the Iron Wolf is their own elder brother, thought dead, who reveals he had killed their father in his bid to join the Iron Horde. Durotan and Ga'nar grudgingly slay Fenris, putting an end to the Thunderlord threat but also closing an unhappy chapter in their family's history.

Though the Thunderlords were broken, the Frostwolves learned that a huge Iron Horde army was marching on Frostfire from Thunder Pass. Durotan then led the Frostwolves in repelling the attack, which ended when Drek'Thar mustered his power to collapse the pass and keep the invaders out. However in order to ensure that Drek'Thar had enough time Ga'nar made the ultimate sacrifice to buy the shaman time. In his parting words, Ga'nar encouraged Durotan to defend their family.

Though remaining in the dark about Thrall's identity as his son, the two developed a close bond throughout their battles together.

With the halted invasion behind him, Durotan comes to understand that neutrality will not spare his clan from the Iron Horde's rampage. He and Draka left for Gorgrond to take the fight to them, and enter into a bizarre alliance with the Laughing Skull clan, orcs of questionable sanity who were also hostile to the Iron Horde. With the help of Penny Clobberbottom, the new alliance settles in a new outpost Beastwatch. While Durotan guards the outpost, Draka accompanies the commander and the Laughing Skull shaman Kaz the Shrieker in their travels through Gorgrond. He directed Bony Xuk and the adventurers to fight on the north against the units of the Breakers. When the orcish women and Bony Xuk managed to get the artifacts of the enemies - Heart of the Magnaron and Will of the Genesaur, he sent the Horde forces to the Iron Docks to fight against an army of the Iron Horde. The adventurer also killed powerful beasts during the journey throughout Gorgrond and brought the trophies to Durotan.

When the Iron Horde's army approached Talador, Durotan, Draka, Gazlowe and the Horde adventurers moved to Talador to reduce the threat of the orcs. After spying, battling and destroying their machinery in the coast, Durotan became disheartened upon learning his childhood friend Orgrim Doomhammer of the Blackrock clan had joined the Iron Horde, whose brutal conquest had led to the deaths of many draenei in Talador. Durotan maintained that his friend can see sense, and eventually confronted Orgrim; however, Orgrim refused to waver from his path. Durotan joins forces with Khadgar and the draenei, headed by Vindicator Maraad and Yrel, and the group planned to relieve Shattrath City from the Blackrock war machine. During the Battle for Shattrath, Durotan's faith in Orgrim proved justified, when his old friend refuses to aid in the deaths of innocent draenei and turns against Blackhand. Durotan, Orgrim, Maraad, and Yrel begin battle with an angered Blackhand, but are overwhelmed after Blackhand kills Orgrim and an explosion detonates, killing Maraad. Durotan is disarmed and forced to the ground, where Blackhand looms over him and sears him with his great mace, reflecting that Durotan never belonged with the Iron Horde.

However, Yrel had also survived the explosion. She confronts Blackhand herself, goading him into battle, and uses the Light to heal Durotan's wounds. Fighting together (Durotan using Maraad's discarded hammer, Yrel wielding Durotan's discarded axe), the two beat Blackhand down until Khadgar teleports them to safety and blows up the Blackrock warlord's command ship.

The victory is a bitter one for Durotan, having lost Orgrim just as the two found themselves allies. He swears vengeance on Blackhand, promising to destroy him when the opportunity presents itself. Afterwards, he returned to Vol'jin's Spear.

Durotan accompanied Thrall and the commander to the plains of Nagrand, home of the Warsong clan. While Thrall and Draka led the attack from the north, Durotan led his forces from the south against Lok-rath. When the adventurer visited Riverside to ensure Durotan's help for the upcoming battle, he asked to deal with the captured orcs at Lok-rath. Although the enemy orcs didn't surrender they were dealt with and Durotan eventually joined Thrall, Draka, Aggra and the Horde forces in assaulting Garrosh Hellscream's base of Grommashar. Durotan and the adventurer face Garrosh head-on, with the son of Hellscream eventually gaining the upper hand after a brutal battle. Thrall intervened then and challenged Garrosh to one last Mak'gora. After Garrosh is finally killed, Durotan is eager to completely destroy the Iron Horde, their allies and Hellscream himself.

He is ultimately seen with the Horde at the Gates of Tanaan after the death of Warlord Azuka as Warchief Grommash challenged them to enter Tanaan.

After Gul'dan took over the Iron Horde, Durotan arrived to Frostwall and met with Warchief Vol'jin and Khadgar and began planning the Tanaan attack. He was surprised by the Warchief and he liked his fearlessness. Durotan accompanied the commander to the Iron Docks and released the captured Iron Horde orc Solog Roark who had been imprisoned by Gul'dan for speaking against him. He convinced the shipwright to build a shipyard for the Horde. He then returned to Frostwall and during the invasion of Tanaan he led the Frostwolves in attacking by land, while the Horde attacked by sea. Upon breaching the Tanaan Gate, his forces met with the resistance in the Iron Front. He was soon contacted by the commander who in the meantime established Vol'mar.

Durotan sent Frogan to the Rangari Refuge in order to keep an eye on the Laughing Skull orcs and the draenei Rangari and refugee. He also commanded three orcs to scout the terrain of Tanaan and eventually sent the commander to check on them.

Durotan was later seen in the Throne of the Elements, watching as the commander and his ring received an elemental blessing. He then participated in the Hellfire Citadel attack and was seen after Archimonde was defeated standing with Yrel and Grommash.

For years after Archimonde's death, the draenei and orcs lived in peace until naaru arrived on Draenor and the draenei became fanatical. Forming the Lightbound, they began to spread the Light whether others wanted them to or not; while some orcs joined willingly, others had it forced upon them. Durotan and Draka had a child named Geya'rah, and Durotan was killed by the Lightbound.[3]

At Bladespire Citadel
Do you hear the howling winds? It is a lonely sound. Make no mistake - if you are not careful, the land will claim you for its own.