From Wowpedia
(Redirected from Dusk Lily)
Jump to: navigation, search

This article is about the variety of flower. For the resistance leader commonly associated with it, see First Arcanist Thalyssra. For the rebel faction itself, see Nightfallen (faction). 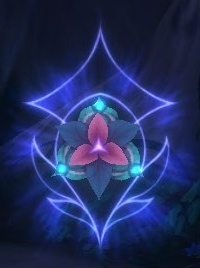 The sign of the Dusk Lily used by the Nightfallen

The dusk lily is a species of flower native to the region of Suramar on the Broken Isles. The plant is characterized by petals of watermelon pink with dark green serrated leaves.

The image of the dusk lily came to prominence at the time of the Nightfallen rebellion in Suramar City, where it was symbolically associated with the rebellion's leader, First Arcanist Thalyssra, and grew to represent the entire movement. Following the victory of the Nightfallen in the civil war against Grand Magistrix Elisande, and the subsequent creation of a new government in Suramar, the dusk lily became the insignia of the nightborne race.

The potent symbolism of the dusk lily within nightborne civilization appears to have been prominent even prior to the Nightfallen rebellion,[1] though it was during the civil war that it achieved its true political connotations. Thalyssra, as First Arcanist of Suramar, had long been associated with the dusk lily within nightborne society—she herself adored the flower,[2] and her personal seal bore its image.[3] After launching a failed coup against Grand Magistrix Elisande and almost dying in the attempt, Thalyssra would form a resistance movement known as the Nightfallen. In time, these dissidents would also come to be called Dusk Lily rebels.[4]

Early in the civil war, symbols of, and references to, the dusk lily were used by Thalyssra and the rebels to make themselves known to allies and sympathizers.[5][6] As the conflict progressed, images of dusk lilies were utilized to send a message to the Grand Magistrix and her allies, with a lily being left on killed combatants[2][7] and in prominent instances of rebel activity, such as after the rescue of Vanthir from the Terrace of Order.[8]

Following the conclusion of the Nightfallen rebellion and the defeat of Grand Magistrix Elisande, the nightborne formed a new faction under the leadership of Thalyssra. Their new emblem became that of the Dusk Lily itself, marking the beginning of a new chapter in shal'dorei history. 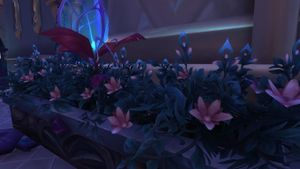 While dusk lilies are frequently mentioned in-game and seen illustrated, no growing example has been confirmed as such within the game itself. Suramar City does, however, host numerous flowers and other flora that share many of the dusk lily's traits.

One of the more promising options (pictured) possesses the correct color scheme, and can notably be found in great numbers around the Estate of the First Arcanist, the residence of First Arcanist Thalyssra.