“The shal'dorei will rule this world!”

— Common battle cry among the Duskwatch

The Duskwatch are the primary body responsible for maintaining law and order in the city of Suramar. Boasting a wide array of skilled mages and warriors alike, the Duskwatch represents the bulk of Nightborne armed forces.

Members of the Duskwatch serve largely as police for the city, enforcing the orders of the city's regime. Despite probably serving a relatively domestic role while the city was sealed off from the remainder of Azeroth for 10,000 years, the raising of Suramar's shield has led to the Duskwatch taking on a more active military role. They were regularly employed as soldiers and shock troops, being deployed throughout the greater Suramar region.

With the beginning of the Burning Legion's third invasion of Azeroth, Suramar City has become a troubled place. Dissent grew in the face of the Grand Magistrix's pact with the Legion, and the Duskwatch were often used as a tool to put down (usually violently) any form of insurrection. In spite of the order's notorious loyalty to Elisande, numerous members of the Duskwatch began to defect to the growing Nightfallen rebellion as their leader's actions begin to grow more erratic and callous.[2]

Members of the Duskwatch can be found throughout Suramar City, patrolling or standing guard at key points. The Sanctum of Order on the Grand Promenade serves as the watch's headquarters. With the success of First Arcanist Thalyssra's rebellion, the Duskwatch began to serve the new regime, eventually becoming part of the Horde alongside Suramar as a whole. 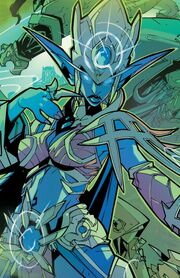 The organization's name seeming to make reference to the Nightwell, little is known about the Duskwatch's beginnings. Regardless, by the time the shield came down over 10,000 years later, the Duskwatch were firmly established as the chief peacekeeping force of Suramar, and exclusively loyal to the city's ruler, Grand Magistrix Elisande.

Arrival of the Legion

When the Burning Legion began its third invasion of Azeroth, an ultimatum was delivered to the city of Suramar by the Legion's representative, Gul'dan. Ultimately choosing to bow to the demons' demands, the Grand Magistrix's decision angered many in Suramar. Chief among these, the First Arcanist Thalyssra quickly instigated a coup against Elisande. During this insurrection, however, the dissidents were ambushed, probably by Duskwatch forces. In the wake of the attempted plot, the Grand Magistrix and her supporters—including the Duskwatch—became virtually unopposed in their rule.[3]

As events progressed, forces from the rest of Azeroth arrived in the Broken Isles to oppose the Legion. Having aligned itself with the demons, Suramar City became something of a focal point for the conflict. At this point, the city hosted a large occupying force of demons, who were known to work in tandem with the Duskwatch to maintain order and obedience.

Before long, a resistance to Elisande's rule formed and began to grow outside the city, led by Thalyssra, who had survived the failed coup. Initially composed mainly of recruited withered and champions from outside the Broken Isles, the uprising quickly gained support in the face of Elisande's harsh policies. Attacks and other operations were regularly orchestrated within Suramar, ruthlessly opposed by the Duskwatch, who continued to enforce unpopular measures such as arcwine rationing. As the insurrection grew unabated, the Duskwatch started to take drastic action, arresting citizens en masse (including children),[4] and patrolling the streets alongside demons.

Despite the steps taken by Elisande and the Duskwatch, the rebellion continued to grow in power, even launching attacks on secure areas such as the Arcway and the Court of Stars, which the Duskwatch failed to defend (though security was considerably tightened afterwards). By this time, much of the city's population, particularly those in the lower castes of nightborne society, were highly sympathetic to the cause of the Nightfallen, and were outraged and terrified by the actions taken by Suramar's ruling powers. Even the loyalty of the Duskwatch was tested by the severe and violent stance that the Grand Magistrix and her supporters were taking.

The final straw for many in the Duskwatch, however, came with the massacre at the Waning Crescent. Incensed by the rebels' continued successes, the Grand Magistrix sent a large force of demons and nightborne to slaughter the majority of the residents of the Waning Crescent, one of the greatest hot spots for dissent in the city. Although some escaped with the help of members of the Nightfallen, the remaining civilians were either killed or enslaved by the Grand Magistrix's forces. Though many members of the Duskwatch were ordered to take part in the operation, the horrific nature of the incident convinced many that Elisande no longer cared for the well-being of the nightborne people. Thus, members of the Duskwatch began to desert from their posts and defect to the Nightfallen insurrection.[5]

As elven forces led by High Priestess Tyrande Whisperwind and Lady Liadrin arrived to aid the rebellion, large scale fighting broke out in the Grand Promenade. Establishing camps from which to siege Suramar just outside the city, the invading armies clashed with considerable Duskwatch forces dispatched to defend the outskirts. During the fighting, disguised Duskwatch agents attempted to infiltrate the camps of both elven armies, though they were discovered and eliminated before they could achieve their objectives.[6]

Despite the Duskwatch's efforts, the rebels and their allies would eventually storm the Nighthold itself and put an end to both Elisande's regime, as well as demon influence in the city.

With the rebellion over and the Nightfallen victorious, a new government was established to rule the nightborne led by First Arcanist Thalyssra; the Duskwatch would maintain its previous role as Suramar's security force. Victoire, a member of the watch who had changed sides during the conflict, was made First Blade and placed in charge of the Duskwatch. Thalyssra's personal security force became composed of Duskwatch Sentinels.[7]

Thalyssra would ultimately pledge the loyalty of the nightborne to the Horde under Warchief Sylvanas Windrunner in the lead-up to the Fourth War. As such, the Duskwatch and the rest of Suramar's citizenry became a part of their new faction.