Not to be confused with the Avatar warrior ability or the 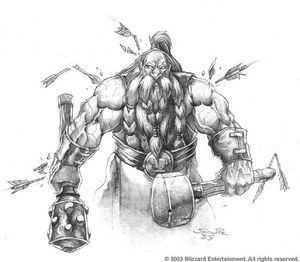 The discovery of their titan heritage changed the Ironforge dwarves forever. The dwarves have embraced this new knowledge and delved deep inside themselves in search of hidden power left there by their creators. Most have discovered the ability to turn their flesh to stone for limited periods, but a few have persisted to unlock further secrets - though none have yet discovered what the titans intended them to do with their abilities.[1]

To become a dwarven avatar, an Ironforge dwarf must make a pilgrimage to a shrine to the titans (found in Bael Modan, and at most major dwarven excavations where titan artifacts have been discovered) and meditate undisturbed for three days without food or water. As he connects with the essence of the titans, the dwarven avatar learns to speak to the earth itself. With fists of stone and incredible strength, dwarven avatars make unarmed attacks with greater and greater force. As the dwarven avatar progresses, he makes these attacks with greater strength and power. A dwarven avatar’s enhanced connection to earth and stone hones the stonecunning possessed by all Ironforge dwarves. This improves his ability to check for things such as sliding walls, stonework traps, new construction (even when built to match the old), unsafe stone surfaces, shaky stone ceilings and the like. Something that isn’t stone but that is disguised as stone also counts as unusual stonework. The dwarven avatar can become nearly immovable, once he learns earthstance. He resists being bull rushed or tripped when standing on the ground. Experienced dwarven avatars, learn to draw upon the metaphysical power of the titans and channel it into greater physical strength. A dwarven avatar can harden his skin into stoneskin. Though all Ironforge dwarves can learn to turn their bodies to living stone, dwarven avatars learn to focus this ability to even greater effect. The dwarven avatar learns to project his own energies into the earth to shift and shape it to his will. The most experienced dwarven avatars unlock the greatest power of their titan heritage, acquiring the ability to transform their bodies into living iron.[2]

The inspiration for this class likely came from the mountain king ability 'Avatar' in Warcraft III.

By focusing the energies of the dwarves’ “newly discovered enchanted heritage”, the mountain kings can grow in size and strength – and take on the physical characteristics of carved stone. In this form, they are impervious to magical attacks and have greatly increased durability.[3]