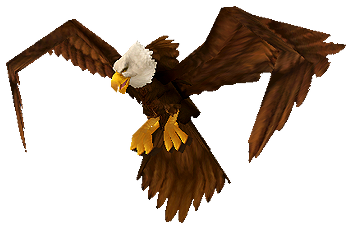 Eagles are Birds of Prey, found mainly in mountainous areas throughout Azeroth. The eagle is a national emblem for both the human nations of Alterac (a single-headed version) and Lordaeron (both a single[1] and a mythical twin-headed version[2]). The Amani tribe of Forest Trolls also worships an eagle loa named Akil'zon.

Eagle meat and eggs are suitable for consumption,[3][4] the eggs even being a delicacy among tauren.[5]

Their feathers are commonly used in taunka fortune-telling ceremonies[6] and to help with crafting arrows.[7]

In addition, there are also undead eagles, usually serving the scourge:

These birds of prey inhabit nearly every terrain and climate, though they all prefer high, secluded nesting spots. A typical eagle is about 3 feet long and has a wingspan of about 7 feet. They are diurnal birds of prey. Eagles dive at prey, raking with their powerful talons.[8]

The Eagle Spirit near Anzu is the only known eagle to be present in Outland, but his presence does suggest that there are (or used to be) other eagles.