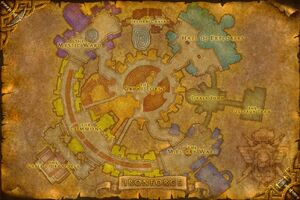 That foul fiend of an elemental is behind this?! She was bad enough without that two-headed buffoon and his cult of crazies riling her up.

Time to show her what happens to those who cross hammers with Ironforge and its allies, eh? Oh, and tell Commander Cragfist what's happened here when we return; I'll need to work on getting the city and its good people back in order.

Theradras can't be allowed to continue her attacks. Time to break into her boulders!

Ol' Theradras was behind all the movin' amd [sic] shakin', ye say?

And the Cult o' Twilight's Hammer put her up to it?

On completion, Cragfist gives a shout only you can hear:

This quest opens up after the elemental invasion event in Ironforge. Players can get in the instance by either using the Dungeon Finder tool or clicking on any earth elemental portal in the city. Players will wind up in Maraudon!

That... THING... is behind the earthquakes and elementals in Orgrimmar?!

She's going to regret ever having allowed that wretched ogre-mage within earshot. We're going to grind her down to dust!

Theradras wreaking havoc for the Cult of Twilight's Hammer, eh? And she's in pieces, now?

Well done! Orgrimmar is in your debt. On completion, Kang gives a shout only you can hear: