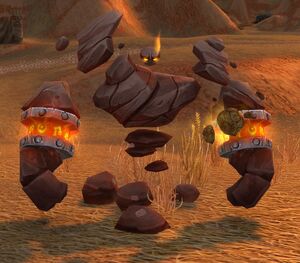 Earth elemental shown with the updated model in Battle for Azeroth. 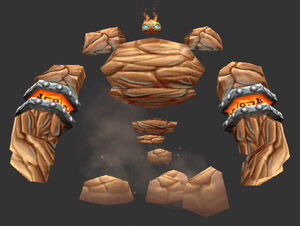 Earth elemental as they appeared in World of Warcraft prior to Battle for Azeroth.

To keep Azeroth safe from these threats, the titans imprisoned the Old Gods underground and banished the savage elementals to the titan-constructed Elemental Plane, a secure dominion where the elementals could dwell without harming Azeroth. Four domains were created within this primordial realm to serve as ideal environments for each type of elemental. One of the Elemental Plane's domains, a rough domain known as the Deepholm, is home to the Earth elementals. With the elementals' departure, nature calmed, and the world settled into a peaceful harmony.[1]

Princess Theradras and the Centaur

Centuries ago Princess Theradras, the only daughter of Therazane the Stonemother, and Zaetar, first son of Cenarius, began a relationship. The offspring of their time together became known to the people of Kalimdor as centaurs, who promptly slew their father for his part in their misbegotten creation. Fearful of Cenarius' wrath, the grief-stricken Theradras sequestered her dead lover's body in her secret sanctuary, the Crystal Caverns of Terramok, where she watches over him to this day.

Following Deathwing's Shattering of the World Pillar in Deepholm and his destructive re-emergence into Azeroth, the Elemental Plane collided with the physical realm and resulted in drastic geographical upheaval, causing chaotic elementals to pour out into the world of Azeroth. After witnessing the devastation Deathwing and his followers caused her realm, Therazane treats all outsiders with open hostility. After the heroes convinced Therazane that they will indeed leave Deepholm once the World Pillar has been repaired, a battle takes place between the Twilight Cultists and Therazane's Earth elementals. Therazane picks out the most dangerous foes, smashing them into pieces before moving on to the next. Ultimately with the help of the elementals of the earth the World Pillar is repaired.

As a shaman pet

Shamans are able to cast an

An Earth Elemental is a hulking mass of rock which bears a humanoid torso, a flat head with glowing eyes, and two muscular stone arms encircled by giant copper bracers. Its torso trails away into a pile of formless rock that floats along the ground. Earth elementals, the strongest of all elementals, are beings of destruction. They use their tremendous strength to batter their enemies. They move through stone as easily as a human walks along the ground, and while they look like they might fly, they always remain in contact with the ground. Larger and larger earth elementals favor grappling attacks, as their size and strength give them a significant advantage over most enemies. When possible, earth elementals bull rush their opponents into walls or off cliffs. An earth elemental can glide through stone, dirt, or almost any other sort of earth except metal as easily as a fish swims through water. Its burrowing leaves behind no tunnel or hole, nor does it create any ripple or other signs of its presence. A move earth spell cast on an area containing a burrowing earth elemental flings the elemental back 30 feet, usually stunning the creature.[2]