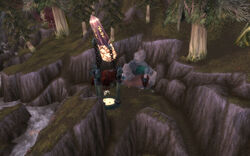 Outside of Earthshatter Cavern.

Earthshatter Cavern is a cavern filled with Twilight's Hammer agents and enslaved earth elementals near Ameth'Aran.

The Twilight's Hammer have opened a portal to the Emerald Nightmare inside, where they are keeping Thessera imprisoned.

After the Battle for Darkshore the cavern is much smaller, consisting only of a small room at the entrance where Granokk is present. The subzone has been removed and it is considered part of Ameth'Aran.