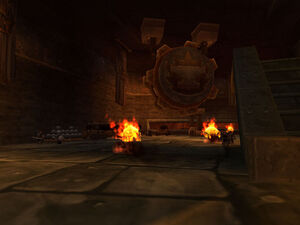 The East Garrison is one of two garrisons that overlook the Dark Iron Highway inside Blackrock Depths. The garrisons guard the approach to two giant doors at the entrance to Shadowforge City. When closed, these doors would block an invading army coming up the highway and entering the city. Passages built inside the doors would allow defenders to cross the road between the two garrisons and fire down at the invaders from openings. When players first enter the instance, the eastern door is locked in the open position. That position allows players to reach the Black Anvil and Lord Incendius via the highway, but prevents them reaching the West Garrison, the Manufactory and the Grim Guzzler in the west side of Shadowforge City. To close the door and align the passageways, the Shadowforge Lock inside the East Garrison must be lowered. Lowering the lock allows a wheel to turn, a chain to move, and the door to close.

A small door near either Prospector Seymour (Alliance) or Razal'blade (Horde) provides easy access into the garrison from a location close to instance entrance. Alternatively, the garrison can be accessed once players entered the Ring of the Law and defeated the challengers there. Players can also reach the garrison from The Domicile and Shrine of Thaurissan by passing by the spectators looking down at the Ring of Law.