From Wowpedia
(Redirected from Easter egg)
Jump to: navigation, search

An easter egg is an undocumented, obscure, or otherwise "hidden" command — usually buried deep within a program's source-code and only triggered by executing a certain series of actions or system commands. Often, an Easter egg will reveal an inside joke, though Easter eggs can also be placed into in-game props and scenery or only in areas visible to those that are actively using "cheat codes" (or otherwise circumventing the "normal" operation of the software).

While Easter eggs were once included in virtually all computer software, software companies such as Microsoft have discontinued the practice, citing security concerns associated with undocumented (and often untested) code.

These are mostly Blizzard-related Easter eggs.

See In-jokes and references for more.

Guards of cities will respond to some emotes such as /wave, /rude, /kiss, or /salute. This does not apply to all guards though, most notably Darnassus Sentinels do not reply to emotes and even the same guard will not always respond. However, if you ask a Darnassus Sentinel about the enchanting trainer, she may respond as if you said she was enchanting. Also, if a blood elf paladin /eye a Silvermoon City Guardian, they will /kneel. 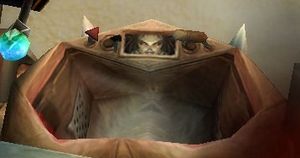 A hidden image of Sarah Kerrigan, the Queen of Blades, on the cockpit display of goblin shredders.

If you look into the cockpit of a goblin shredder, you can see a picture of Sarah Kerrigan from Starcraft on the control panel. The new shredder model first introduced via the

At the Shrine of the Fallen Warrior, there is a memorial dedicated to an orc with the initials "M-K". M K was Michel Koiter, one half of Twincruiser, a Blizzard illustrator who passed away during the development of World of Warcraft. If you visit the memorial, you will find a spirit healer named Koiter. Most likely named in dedication for the once beloved man.

Players who are fed up with the rude female dwarf who presides over the quest chain to obtain the key to Searing Gorge, Mountaineer Pebblebitty in extreme southern Loch Modan, may feel inclined to use /rude on her after all the trouble she puts them through. Blizzard has anticipated this and provided an appropriate response.

When you are riding on the tram, when in the underwater area, you can sometimes see Nessy, a naga siren, a Deeprun Diver, a Basking Shark, or a Deeprun Chest.

If you own a non-combat pet and stop moving for a while, it will begin to sleep or do other kinds of emotes.

If you type /dance on the civilian ghosts in Stratholme, they will respond in kind and dance with you. Even if you attack them, subsequently dancing with them will make them dance with you instead of continuing to attack you.

Also, appropriately, they will respond to the /rude emote with a rude action of their own. 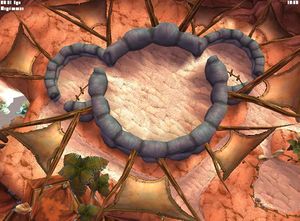 Hidden Mickey Mouse in the Valley of Honor; taken with WoWMapViewer.

An exceptionally well hidden Mickey Mouse is located in the Valley of Honor within the Horde city of Orgrimmar, where the Hunter trainers are. It is so large, and so well sculpted into the surroundings, that most people will never know that it is there. The only way to see it is to manually increase the maximum zoom setting of the camera.

The punch cards you get in Gnomeregan, and the machines that read them, all have hidden binary messages on them which can be translated easily from screenshots with an online translator. For a full list see Matrix Punchograph 3005.

[Yellow Punch Card]
If you can read this, you're standing too close

Bambina (Bambi), Mother of Bambina (Bambi's Unnamed Mother), Flora (Flower), and Thudder (Thumper) will all be walking in close proximity to the Westfall Brigade Encampment where the ground is yellow (You will know what I mean when you get there). Also, there is a mob named "Westfall Brigade Hunter" who will occasionally spawn and shoot Mother of Bambina and do a /cheer, causing Bambina to become enraged, get renamed to "Vengeful Bambina", and start attacking the Hunter.

The three dwarves Olaf, Eric "The Swift", and Baelog (in Uldaman and the Badlands) are all from another Blizzard game named The Lost Vikings.

[The Shaft of Tsol] and the

[Gni'kiv Medallion] were also references; "Tsol" and "Gni'kiv" are "Lost" and "Viking" backwards. 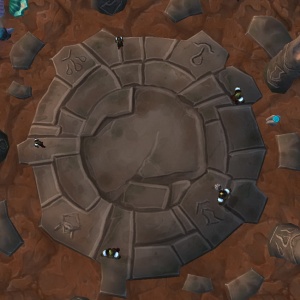 Along the Webwinder Path, there are some felled trees. One end has a large smilie face on it.

There is also a large smiley face underneath Karazhan. You can see it if you log out near Karazhan. Once you log back in, before the doodads and NPCs load up, you can see the smiley face. Humans can get under Karazhan to the smilie face by jumping to a certain ditch in the corner of the rubble in the back side of Karazhan (facing the crypt/graveyard).

In Searing Gorge, if you head just a little north of Blackchar Cave and zoom your mini-compass all the way out, you can see a smiley face in it.

When floating underwater, one of the motes that float by will very occasionally be a tiny smiley face.

In Stranglethorn Vale, the vines on trees look like orc faces, or possibly, the Great Deku Tree from the Legend of Zelda series.

[Incarnation: Tree of Life] form, he can see a hidden smiley face on the bark.

On any icebreaker ship, there is a smiley face inside at the front. 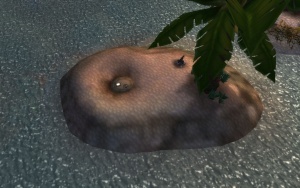 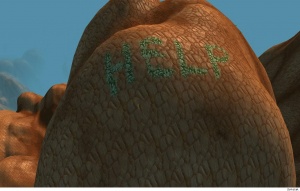 Northeast of Thunder Bluff on top of a mountain is a line of text that reads "HERB", but at another look you will see that it says "HELP" backwards. 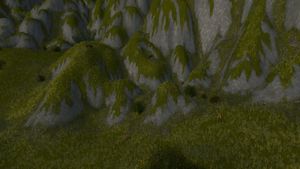 Just Southeast of Hammerfall at the right angle, you can clearly see "LOL" carved into the mountain-side. 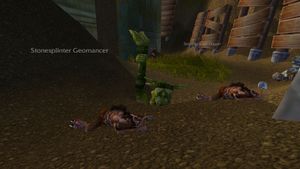 Located within Ironband's Excavation Site is a partially unearthed Statue of Liberty. This asset was on Stranglethorn Vale's beach in the WoW alpha, a reference to Planet of the Apes, but it was removed and remained as such until Cataclysm.

Slightly southwest of the Wreck of the Mist-Hopper there is a face made out of clams smoking a pipe.

In the main building of Mistfall Village, a bush chicken is playing a troll guitar in hopes of spare change.