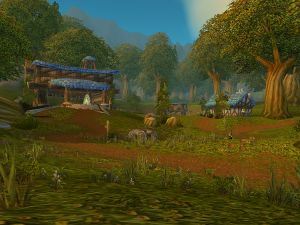 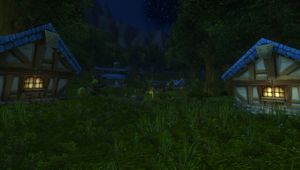 The camp at night.

Eastvale Logging Camp (also known as the Eastvale Lumber Camp[1][2] or just Eastvale Camp)[3] is a series of lumber mill camps with living areas in between[4] located in the far east of Elwynn Forest, under the very shadow of the Redridge Mountains north of the main road. Orders for lumber are constantly streaming in from various buyers and the lumberjacks work against strict deadlines. Because of its location in a more hostile wilderness, wild animals are proving to be troublesome. Wolves and bears in the area have become a menace, chasing off workers and threatening to cause delays in delivery deadlines. The problem has become significant enough that the Stormwind Guard has become involved, recruiting adventurers to collect abandoned lumber and eradicate some of the aggressive wildlife.

It is a great place to go after completing the

[10] Further Concerns quest where you have to talk to Guard Thomas at the nearby bridge. Not only do you get a few XP for finding the area, you get two quests - one for finding another set of bandannas (like in the Northshire Vineyards) and the other is collecting wood from up north of the logging camp. This quest works perfectly with the

[10] Protect the Frontier quest from Guard Thomas where you have to kill some forest bears and prowlers.

An important NPC for the level 10 warrior quest

[10] Marshal Haggard can be found at the extreme east end of the camp. This location is also featured in the "Legend of Stalvan" quest chain. The area has its own tailoring trainer and some other merchants.

Even if it is centered around the lumber mill, there is also stables in this area where players can purchase their riding skills and both the normal and epic human mounts.

Near the bridge to the west:

The camp faces attacks from the murlocs.[5]