From Wowpedia
(Redirected from Ebonhorn)
Jump to: navigation, search

Ebyssian, also known as Ebonhorn, is one of the last few remaining black dragons in existence. His egg was purified before he was born and was thus freed from the corruption of his dragonflight in Neltharion's former lair by Huln Highmountain 10,000 years ago, making him the oldest uncorrupted black dragon in existence. Ever since, Ebyssian has watched over Huln's descendants under the disguise of a Highmountain tauren spiritwalker named Spiritwalker Ebonhorn.

Ebyssian cannot leave Highmountain or he risks the Old Gods trying to corrupt him.[1]

While Ebyssian apparently chose his own name to go by, in gratitude he has since faithfully served the Highmountain family under the guise of Spiritwalker Ebonhorn, guiding each of Huln's descendants during their reigns as High Chieftain and only revealing his true identity to them upon their secretive ascension ceremony.[2] 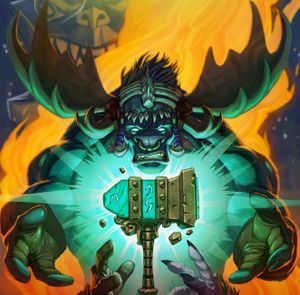 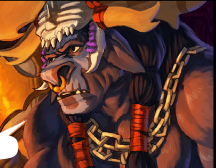 [Hammer of Khaz'goroth] and aided by all the peoples of an undivided Highmountain. This caused outrage among Dargrul and the tauren chieftains, who said that the Hammer belonged to the people of Highmountain alone. Ulan responded that the Highmountain Tribe would obey the spirits, and Jale, Lasan and Torok begrudgingly said that their tribes would do so as well. Dargrul, however, claimed that he had also visited Neltharion's Vault but had seen nothing of outsiders — only that strength would drive back the Legion. Without warning, he leaped forward and grabbed the hammer, using it to kill Ulan before fleeing. Distraught, Ebonhorn said that he never meant for the tragedy to happen. Ulan's daughter Mayla, now High Chieftain, replied, "But it did."[3] 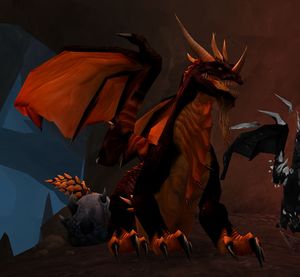 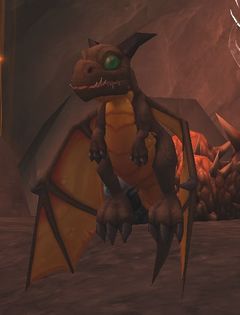 Upon entering the vision, the story of Ebyssian's birth is told, as Huln uses the Hammer of Khaz'goroth to purify a dragon egg as Igrul the Scalebane and the adventurer protect him from the vault's guardians. As the vision ends, Spiritwalker Ebonhorn transforms into his true form and reveals himself as Ebyssian to Mayla. Mayla is shocked at this revelation, but Ebyssian assures her that he is still the same spiritwalker she has known her entire life, before at last pronouncing her as High Chieftain.

After corresponding with Chieftain Baine Bloodhoof in the aftermath of the Argus Campaign, Mayla Highmountain accepted an invitation to attend a feast in Thunder Bluff. Yet when Baine and the Horde champion greeted their Highmountain tauren guests, Spiritwalker Ebonhorn was tormented by the Old Gods' forces of Uul'gyneth attempting to corrupt him,[4] and he and Mayla were forced to retreat back to Thunder Totem while Baine and the Horde champion defended Thunder Bluff from Uul'gyneth's invasion force.[5][6] Apparently, the wards Ebonhorn had been maintaining in Highmountain weakened just enough to let the Darkness seep through.[7]

Later on, Baine and the Horde champion traveled to Thunder Totem to offer their aid to mend Ebonhorn,[8] who has been fighting unconsciously to keep a darkness from consuming him. Mayla sent the Horde champion to Spiritwalker Graysky,[9] who has the Horde champion undergo Spiritwalker rituals to walk in the memories of Igrul the Scalebane,[10] Oenia Skyhorn,[11] and Huln Highmountain in order to restore the wards that kept the dark corrupting forces at bay.[12] After restoring the wards, Ebonhorn regained consciousness[13] and revealed Uul'gyneth sought to return and conquer Highmountain. Baine, Mayla, the Horde champion, and Ebonhorn left to join Lasan Skyhorn, Aviash, and Jale Rivermane at Highmountain Summit to thwart the Necrodark's ritual to incarnate Uul'gyneth[7] and restore the final ward. They failed, however, and Uul'gyneth was summoned into the physical realm,[14] leaving the Horde champion little choice but to vanquish Uul'gyneth the Darkness. Ebonhorn revealed his true, draconic form, but Baine agreed to keep it a secret.[15] As a result of these events, the Highmountain tauren pledged themselves to the Horde.

At Baine's request, Ebonhorn participated in a seance alongside the trolls Master Gadrin and Princess Talanji to call on the spirit of the late Warchief Vol'jin. When Baine asked Vol'jin who it was who had told him on his deathbed to make Sylvanas the new warchief, spirits of the dead attacked to silence the question.[16] Ebonhorn then traveled with Baine to the Broken Shore, the place where Vol'jin was mortally wounded, to call on Vol'jin's spirit there and hopefully shed light on the mystery.[17]

[Heart of Azeroth].[18][19] With the task at end, MOTHER directed champions to Highmountain, where they encountered Ebonhorn. Upon meeting with adventurers, Ebonhorn remarked that he had sensed something deep beneath Highmountain within the caverns which were once Neltharion's Lair.[20] After Navarrogg brought the pair into Neltharion's lair, Ebonhorn was stunned to discover that the essence was in possession of Ma'haat the Indomitable, a stone lord from Deepholm. Noting that their kind harbors enmity toward the black dragonflight, Ebonhorn directed champions to heal the fissures with the Heart of Azeroth.[21] Seeking the essence, Ebonhorn and his ally clashed with Ma'haat, who yielded to their power. Declaring them worthy, Ma'haat gave them the essence while warning that the Stonemother would be watching.[22]

[Petrified Ebony Scale] carried on that legacy.[23] Thus, he gave the essence to his allies so that they could empower the Heart Forge with its power.[24]

Ebyssian was later joined by Kalecgos, Alexstrasza, Merithra, and Chromie in empowering the Heart of Azeroth.[25]

Sometime after N'Zoth was freed, Ebonhorn nearly succumbed to its whispers and would have been killed by MOTHER without Magni's intervention. Seeking to save Ebonhorn, Magni called on heroes to venture to the Chamber of Heart.[26] Under the advice of Kalecgos, the hero sought out Wrathion in order save Ebonhorn.[27] Though unable to meet with Wrathion, heroes did acquire a potion of his creation that they used to save Ebonhorn.[28]

We are in luck. Had the Underking learned all of the secrets of the Hammer, we would not be having this conversation.

The spirits of our ancestors cry out for justice. These Necrodark defile all that they touch.

We must all do our part to safeguard Azeroth.

<Stay a while and listen.>

Spiritwalker Ebonhorn says: Wrathion. How did you know that I had begun to hear N'Zoth's whispers?
Wrathion says: One of my agents was watching over you. I knew that if you left the protection of Highmountain, you would become... vulnerable.
Spiritwalker Ebonhorn says: I did not realize you had such personal concern for my well-being.
Wrathion says: Of course. You are my brother. The only one I have.