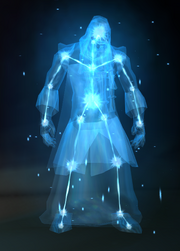 The Echo of Algalon overseeing the anniversary festivities.

During WoW's 15th Anniversary, the echo appeared in the Caverns of Time.

Observation: Multiple temporal anomalies. Entities appear to each be from discrete timelines. No hostile intentions detected.