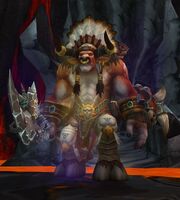 Echo of Baine is a boss to appear in the End Time instance.

Enraged by his failure to protect the world and, most importantly, the Horde, this time-ravaged shade of Baine Bloodhoof lingers within the ruins of the Obsidian Dragonshrine. Although he's still as powerful as the tauren high chieftain from the present, within this shattered future Azeroth, this guilt-ridden echo is little more than a discordant vessel of unquenchable malice and anger.

Echo of Baine is a dps race with emphasis on movement, and has a totem throwing mechanic.

Echo of Baine begins on the most northwest platform. The tank and melee dps should begin the fight from an adjacent platform, and ranged and heals should begin at the platform opposite Baine. The strategy example shown on the diagram refers to these platforms as 4 and 1, respectively.

The tank pulls Baine from platform 3 to 4. As Baine enters the magma, he receives Molten Mace, a short-duration buff to weapon damage. It is advisable for the tank to retreat to the back of the platform, so that Baine wastes part of his buff duration closing the distance to the tank and has less time to melee while buffed. Some slow effects can extend this delay in damage. This process can be repeated following each cast of Pulverize, as Baine will enter the Magma when returning to the tank.

Echo of Baine will cast Throw Totem, knocking back a player with a totem. This totem can be thrown back to Baine, stunning him and delivering damage equal to 5% of his maximum health. To accomplish this, click the totem after it lands. Then you will be given a tiny green targeting circle. Place the circle at Baine's feet and click the mouse to throw the totem and stun him. Any person can click the totem to throw it (and it's probably easier for the person who didn't get punted into the lava).

Echoe of Baine will leap to a ranged player and cast Pulverize, which most notably sinks the platform, so that ranged players must move to a new platform. In the illustrated example, players will swim from platform 1 to 2 after the first Pulverize, then to platform 3, then 4, after subsequent Pulverizes. Note the stacking damage when a player swims in magma, which is moderate.

Echo of Baine should be killed before he pulverizes platform 4, as the magma's stacking damage will quickly overwhelm healing once all platforms are submerged.

Intro
Nozdormu says: The undying flames are all that remain of this sacred place. I sense much anger here...a seething rage, barely held in check. Be on your guard.
Nozdormu says: You must give peace to these lands if you are to face Murozond.
Echo of Baine yells: You! Are you the ones responsible for what has happened here...?

Aggro
What dark horrors have you brought in this place? By my ancestors honor - I shall take you to task!