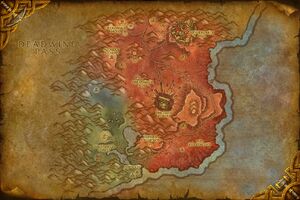 Defeat the Echo of Gul'dan at the Dark Portal in Blasted Lands.

To attune this shard to the place you wish to go, we must follow some of its history.

The first location we will visit is the Dark Portal in the Blasted Lands.

It was there that Gul'dan used a piece of the Vision of Time to travel between realities.

Join me there when you are ready.

The Vision of Time still holds power. It just needs to be unlocked.

Gul'dan was a pox upon all lands that he set foot upon. His death was well deserved.

Note that, while this quest is in your character's Quest Log, you are placed in a special phase and will be unable to see certain NPCs and mobs nor complete certain other quests.

Travel to the Blasted Lands. Anachronos is standing near the Dark Portal, with a Time Rift waiting in front of him:

Click on the time portal. Echoes of Horde soldiers march through the portal, led by the Echo of Gul'dan. The other echoes fade, leaving only Gul'dan.

Should the hero fall:

Echo of Gul'dan yells: Thus do the champions of this world fall!

Gul'dan defeated
Echo of Gul'dan yells: I am Gul'dan! I am darkness incarnate! It cannot end... like this.
Anachronos says: Gul'dan will not be missed... not in this, nor any other timeline.
Anachronos says: Come, we must travel now to the Temple of the White Tiger.