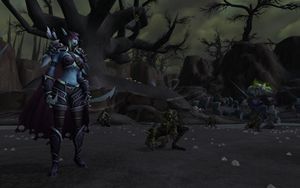 Echo of Sylvanas is a boss to appear in the End Time instance.

Spawned from shattered timeways and cloistered within the Ruby Dragonshrine, a maddened fragment of the Forsaken's leader, Sylvanas Windrunner, waits restlessly. Having lost everything and unable to find peace, this tormented echo aches for a chance to unleash her dark fury at anything still living within these barren, time-twisted wastes.

Before the fight begins, place a World Marker to designate which ghoul you will be taking during the call. Otherwise, assist the tank.

During the fight, make sure to have ranged players stand 10 yards apart so that if one of them is targeted with Blighted Arrows or Unholy Shot, only they receive damage. The target of Blight Arrows must move out of the AoE darkness immediately, as this can kill a player who stands in the area for longer than five seconds. Shriek of the Highborne's movement speed debuff is not a problem unless the person hit is also the target of Blighted Arrows.

The most important aspect is the Call of the Highborne spell. Once Sylvanas announces the call, she pulls all players to her dark circle. Players should move to intercept and kill the ghoul that appears closest to floating raid marker. In order to obtain

Once the ghoul has died, part of the Wracking Pain is dispelled. Players should move through this breach and away from Sylvanas so that they are not killed by Sacrifice.

What lies before you is the aftermath of Deathwing's reign. What was once the Ruby Dragonshrine now lays in waste, its charred husk and scorched earth the only testament to its existence.

It is said that, long ago, a single drop of Alexstrasza's blood melted away the snows and gave life to the great Crimson Oak that stands before you. Its branches raised triumphantly into the sky and radiated the warmth and life of the Red Dragonflight.

But now, its twisted, rotting limbs can no longer harness the power of life and vitality - instead only death and destruction. As flames and corruption extinguished the life force of these lands, the great tree captured an image...and echo of the warriors who fell on its hallowed grounds.

Aggro
Another band of Deathwing's converts? I'll be sure your death is especially painful!

The Calling of the Highborne
Watch, heathens, as death surrounds you!

Wipe
And so ends your story!