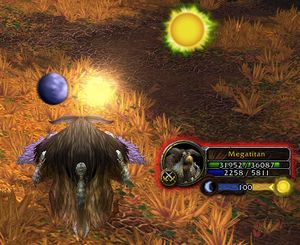 Eclipse is available to all druids who have specced into Balance, and is active while the druid is in caster or Moonkin forms. The druid gains an Eclipse Bar showing his current amount of Lunar or Solar energy; a pointer on the bar indicates which type of energy the druid is currently able to gain.

When the bar reaches 100 energy, it will trigger an Eclipse effect, and switch the type of energy the druid is able to gain; Solar and Lunar Eclipses will thus always alternate. The Eclipse effect increases damage done by Nature/Arcane spells; the bonus is increased by the Balance druid mastery,