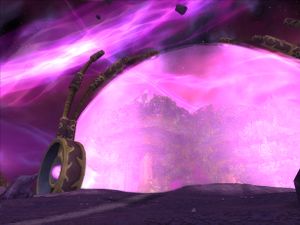 Eco-domes are domes of arcane energy that, much like a greenhouse, provide an environment in which lush plants and animals can survive.

The eco-domes contain the last of Netherstorm's greenery, carefully cultivated by the ethereals.[1]

These structures of channeled energy can currently be found in the central and northern parts of Netherstorm. The remainder of Netherstorm has been rendered hostile to most forms of life by demon invasion, the sundering of the world, or the effects of the manaforges. The ethereals built the domes and are currently maintaining them. The energy that powers these domes is magical, though the techniques for maintaining them have technological aspects.

Some of the creatures inside the domes are not native to the area before it became Netherstorm. Some were even brought from Azeroth.[2]