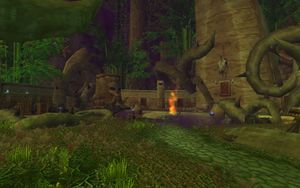 The Edge of Madness is a subregion of Zul'Gurub, accessed by turning right at the crossroads just past Zanza's Rise. It contains a scripted event which is essential to the creation of the various Zul'Gurub Trinkets.

Within this area, players will find a lit brazier and a number of tablets along the walls. Of particular interest, the tablet behind the brazier allows alchemists to learn the formula for

[Gurubashi Mojo Madness]. Like the repair bot schematic in Blackrock Depths, this is not an item to pick up but to interact with (fixed device); all alchemists in the raid can learn this formula at the same time. This potion requires

[Powerful Mojo] to create, but the potion can be traded after it is made, and can often be purchased at the auction house. The only use for this potion is to extinguish the brazier in this room, which starts the event.

This event will spawn one of four possible bosses: Gri'lek, Renataki, Hazza'rah, and Wushoolay. Each boss will drop between one and three of his particular tokens, with a chance for a rare item as well. Each boss's loot table is small and entirely unique; these rare items are available only from them.

There are tablets on the walls describing each boss; one of these tablets will indicate which boss will spawn by commenting that he is "close to the edge of madness." The particular boss which spawns is chosen according to a spawn calendar, going by the day the instance ID was created. This is somewhat convenient when multiple players are trying to create their trinkets; however, since a player needs all four tokens to create his trinket, this also means that it will take at least a month and a half to acquire the needed parts ... assuming, of course, that there is minimal competition for these tokens.

Imps do heavy amounts of damage. Plus, when you kill them they open a portal and 2 elite voidwalkers with a damage aura will come out. So you need to kill one imp at a time. They are demons so you will be able to

[Banish] or enslave them. At least two warlocks are recommended, although you can get by with less if your raid follows directions well and can stop dps on imps and wait for voidwalkers to spawn and be killed. The mad Voidwalkers that are summoned after the Imps are killed are not banishable.

Another trick is to use enslave on the imps. Their physical attacks are slowed when using this spell, but their ranged fire attack can be spammed, resulting in a high DPS output. Used correctly, they can even help to bring down the harder bosses in ZG.